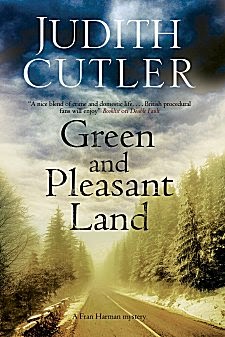 First Line: I was driving from Cleobury Mortimer to Bewdley.

Like many others before her, ex-Chief Superintendent Fran Harman decided to retire-- not because she no longer loved her work but because she no longer wanted to deal with all the governmental and political hoops the police are forced to jump through. Yes, Fran has joined husband Mark in retirement, but they've both been asked to look into a 20-year-old cold case.

Twenty years ago an abandoned car was found on an isolated road running through the Wyre Forest. The car's hazard lights were flashing, and its passenger door open. In the back: two child seats, one empty and one containing a desperately ill baby. Neither the baby's mother nor the elder child were ever seen again.

Fran and Mark begin their investigation and quickly discover discrepancies and mistaken assumptions beneath the surface of the original police work. What they didn't anticipate was the hostility and resentment they meet from some of the people they question. The couple haven't had time to get used to being civilians in a police world. What is very clear to them both is that several key witnesses aren't telling them what they know... and that someone doesn't like the past being dug up.

Having been aboard for this entire series, I completely understood the reasons for both Fran and Mark retiring from their high-stress positions in the police force. One of Cutler's strengths is giving readers so much insight into both the characters' personal lives and what is happening in the modern world of policing that we feel we have our fingers on the pulse of what's really going on. The changes Fran and Mark experience are organic. They are a natural part of the series narrative and don't come across as some unknown supreme being throwing down stray lightning bolts. Yes, occasionally there are multiple plot threads running at the same time, but life gets messy. Seeing how Fran and Mark deal with personal life issues and complicated investigations make them all the more real to me.

This cold case is perfect for the pair's talents. They're expert in police procedure, and they excel at dealing with the personality quirks of all sorts of people. If something becomes difficult, they just work harder, and they often find the strength they need in their relationship.

The setting and the case itself are mysterious and-- with the incessant rain-- water-logged. When the pace becomes sluggish from time to time, a lot of it is due to the fact that the rain indeed has an effect on what they have to do. As Fran and Mark uncover more and more people hiding secrets and motives, the animosity becomes almost Christie-esque. Does everyone have a hand in the woman and child's disappearance? Are there too many suspects? It certainly can feel that way.

Green and Pleasant Land is another strong entry in one of my very favorite British police procedural series. It is a series I highly recommend, and I would suggest starting at the beginning because the events in Fran Harman's life are key to the books. These aren't books that merely feature a murder of the week, tie everything up in a big bow, and then fade away until the new case in the next book. No, this series immerses us in the life of an exceptional woman, her life and her work. It reminds me most strongly of Deborah Crombie's excellent Duncan Kincaid and Gemma James series. I can't get enough of Crombie's characters, and I certainly can't get enough of Judith Cutler's Fran Harman.