Murder on the Champ de Mars by Cara Black 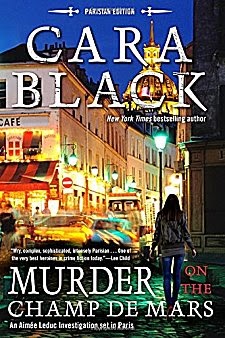 It's April 1999 in Paris, and maternity leave is over for private investigator Aimée Leduc. Feeling guilty over leaving infant daughter Chloë with a child minder, Aimée vows to spend more time with her child, but it's not going to be easy. She's barely started work on pending cases when she's approached by a young gypsy boy. His mother is dying and urgently wants to speak to Aimée, but the woman is abducted from the hospital before Aimée can see her. All this young private investigator has to go on is the fact that the woman's information has something to do with her father's unsolved murder. It's a race against the clock for Aimée, and race she will because knowing who's responsible for her father's death means a fresh future for her and her baby daughter.

I have come to enjoy Cara Black's series. It's been a pleasure to get acquainted with Paris and its history district by district. In Murder on the Champ de Mars, we learn about the history of the gypsies, and it's a tragic one. I've also been looking forward to seeing how Aimée adapts to motherhood because I didn't think it would be an easy transition. I was right. In fact Aimée-as-parent is one of the things that bothered me in this book.

The parenting issue is clouded by the appearance of Chloë's father, and even with his presence in the background, Aimée's good intentions come to naught. In fact she seems to go out of her way to be away from her baby and to put herself in dangerous situations. This is a woman who needs a sharp jolt to force her to face reality. You can't speed like a maniac through Paris, break into buildings, and generally try to act as though you're a super hero when you have a baby depending on you. But Aimée does, simply because it's more important for her to find out who killed her father. She is a woman obsessed.

Another issue was the pacing of this book. At times it moves at breakneck speed, but there are slow intervals when nothing much seems to be going on. Aimée is a character I've never completely warmed up to. She's much more interested in fashion and makeup than I. My interest has always been more focused on her partner René, their part-time employees, and the stories the author weaves. These slow intervals when Aimée is basically spinning her wheels and grasping at straws affected my enjoyment of the book. By the end, I almost felt as though the mystery solved itself and Aimée just happened to be in the vicinity.

Something else that I noticed in Murder on the Champ de Mars is the prevalence of French words and phrases. Much more than I felt necessary. I certainly don't have a problem with it since I can read and speak French, but if other readers can't, they may find this to be distracting and annoying.

All in all, I did enjoy this book. No non-French crime writer can take you through Paris like Cara Black. It's the main reason why I keep coming back for more. However, it's certainly going to be interesting to see if Aimée's parenting skills have improved in the next book.