The Beige Man by Helene Tursten 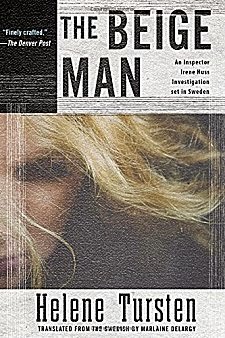 First Line: The new moon and the stars shone as brightly as diamonds in the blue-black January sky.

A stolen BMW leads to a high-speed chase and a hit-and-run fatality in Göteborg, Sweden. When the stolen car is found, search dogs can't trace the thieves, but they do find the corpse of a young girl in a nearby cellar. It's up to Detective Inspector Irene Huss and the Violent Crimes Unit to find the answers, and one of the very first answers they find is that the victim of the hit-and-run is not only the owner of the stolen BMW, he's a retired police officer. Is this some sort of strange coincidence? It's something that Huss has to find out while the young girl's murder pulls her inexorably into the world of sex trafficking.

I always enjoy visiting the world of Detective Inspector Irene Huss, former national jujitsu champion, mother of twin girls, and head of the Violent Crimes Unit. The Beige Man is no exception. A great deal of the allure of this series is how the main character juggles her personal and professional lives. In this seventh book of the series, Huss has two truly mystifying investigations, one of which takes her to the Canary Islands to follow a lead. At the same time her two daughters are leaving the nest, and her aging mother's health demands that Irene give her special care and attention. Some readers don't care for police procedurals that delve deeply into the characters' lives, but-- as long as the mystery itself doesn't suffer-- I like them. There have to be thousands of police officers all over the world who have to deal with these same demands on their time on a daily basis, and I believe bringing some sort of focus on their personal lives gives  true insight into how they manage to get it all done (or in some cases don't get it all done).

While I did enjoy becoming up-to-date with the events of Huss's personal life, I found her two investigations truly puzzling. It wasn't until I had the full advantage of hindsight that I realized I hadn't paid enough attention to the implications of a conversation Huss had had with another character towards the beginning of The Beige Man. It's not often that I'm totally surprised by the solution to a case, so this was certainly a treat.

If you'd like to conduct your own investigation into Swedish crime fiction, I recommend Helene Tursten's Detective Inspector Irene Huss series. Good mysteries, and Huss is interesting whether she's at home or on the job. She's also one of the few police officers who has a boss who may be a jerk, but he's a jerk with depth. (How's that for a character reference?)