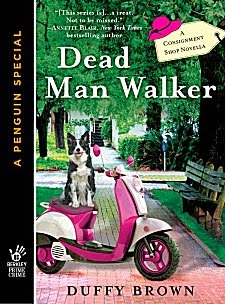 It's springtime in Savannah, Georgia, but it's SDDM (Same Day Different Mop) for mortician/ beautician and housekeeper Mercedes-- or it would be if she hadn't found homeowner Conway Adkins naked as a jaybird and dead in his bathtub. Now Mercedes is a woman with a past, and she knows that the police are going to think she's the perfect prime suspect, so she calls local lawyer Walker Boone to come help her out.

There's nothing Walker Boone would like to do more than get Mercedes out of this tight spot, but there's two flies in the ointment: One, Prissy Fox consignment shop owner Reagan Summerside won't stop nosing around, and, two (which is even more worrisome), Walker Boone has his own connections to the dead man. He may just find himself on the run from the law... if that pesky Reagan would get out of his way.

This digital short story sets up the newest Consignment Shop mystery (Demise in Denim) which will be released in April, and it has some surprises for readers of the series. For one thing, it actually sounds a bit more Southern than the novels, which leads me to surprise number two: the entire story is written from Walker Boone's point of view. More on that later.

Duffy Brown adds more humor to this short story, too, and I lost count of the times she had me chuckling with her descriptive phrases and a few well-chosen scenes like the one in the dead man's home before the police arrive. The dead man, Conway Adkins, was probably the most hated man in Savannah, so the suspect pool should be a large one, especially with a stranger from Charleston in town who seems to be in cahoots with an ambitious local. Notice I said "should be." The police are aiming for the most obvious first.

Which leads me back to Mercedes and Walker. Mercedes is a wonderful character, and I definitely want to see more of her primarily because of her thought processes. (Mercedes believes that her housekeeping services are in such high demand that someone is willing to bump off her clients in order to be moved on up to the top of the list... among other speculations.)

Having the story told from Walker's point of view is a stroke of genius. His voice is different from Reagan's-- more Southern-- and we not only get to learn more about his mysterious background, we get to learn how he truly feels about Reagan Summerside.

Yes, this is a perfect lead-in to Duffy Brown's next book in the series, Demise in Denim, and I'm really looking forward to finding out how Walker Boone gets himself out of trouble. Roll on, April!