A High-End Finish by Kate Carlisle 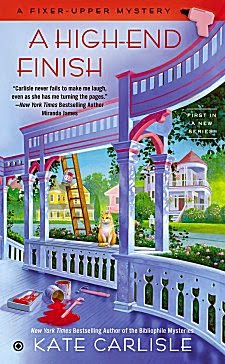 First Line: "You could've warned me that installing drywall would be hell on my manicure."

The entire northern California town of Lighthouse Cove has been declared a National Historic Landmark District because it's filled with wonderful Victorian architecture. Shannon Hammer's father restored several of them, and Shannon is continuing the tradition with Hammer Construction, the family business.

Her home renovation and repair business is flourishing, but she can't say the same thing about her love life. After a blind date goes disastrously and publicly wrong, Shannon is Suspect #1 when she trips over the body of her date in a home she and her crew are renovating. Shannon's got to clear her name, so it's time to see if she's as good with clues as she is with drywall.

The smooth, fast pace and lush northern California setting of sea and redwoods drew me right into A High-End Finish and wouldn't let me go. That's because there's a lot more to this book than the setting. Lighthouse Cove is an architecture buff's dream, and the building and restoration details are a definite bonus. However, what really makes this book come to life are its sense of humor and Kate Carlisle's cast of characters.

Shannon Hammer is just the type of level-headed, smart, funny, and hands-on type of friend everyone would love to have. Her signature color has become pink. Not necessarily her choice, but she's embraced it: pink tools, pink work gloves, pink bicycle.... (Like me, she discovered that pink tools are good things to have because the men in her life won't walk off with them.) Shannon works in what's typically a man's profession, and she not only gets along with everyone on her crew, she proves that she's more than capable of doing the work herself. She's not just window dressing.

And that's good because her retired father likes to go out and about in his RV. She's also surrounded by four close friends who are a wonderful support group for each other-- even if one of them is an inveterate matchmaker and another has brainwashed herself with too many romance novels.

Speaking of romance novels, I'm not a person who cares for romance in my crime fiction. It doesn't mean I'm not romantic; it's just how I roll. But I started to move over to the "dark side" a bit with A High-End Finish. You see, Carlisle has created not one but two handsome intelligent men to add a bit of sparkle to Shannon's lackluster love life. Police chief Eric Jensen is going to look gorgeous whenever Shannon gets involved in an investigation and ruffles his feathers, and bestselling author MacKintyre Sullivan (call him Mac) has just bought the old lighthouse mansion and needs it renovated. I really liked both these men and would find it difficult to choose between them myself. My only worry is that it would be all too easy for the Eric/Mac situation to turn into something akin to Janet Evanovich's Joe/Ranger endless indecision fest.

So how did the mystery itself fare amongst pink tools, best friends, and handsome men? Pretty good actually, even though one character's reaction to something told me immediately that I'd just been introduced to the killer. That's small beans, though, because Carlisle has created a setting and characters that I'm anxious to get back to. Good thing I have the next book in the series, This Old Homicide, waiting for me!