The Windermere Witness by Rebecca Tope 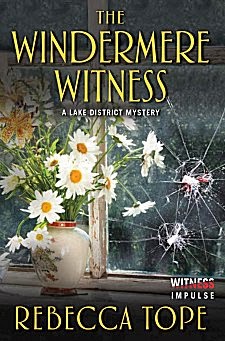 First Line: What a day for a wedding!

Persimmon "Simmy" Brown has moved to the Lake District, near to her parents who run a bed-and-breakfast. Simmy's new florist shop is doing well, especially with large orders like the one she's delivering for the wedding of a millionaire's daughter.

What should be a joyous occasion turns to tragedy when the bride's brother is murdered and his body found in the lake. Since she was one of the last people to see and speak to the young man, Simmy becomes involved with the grief-stricken family. The more time she spends with these people, the more secrets about them she learns, and when tragedy strikes yet again, Simmy is right in the middle of the investigation.

One of the very first things I learned about Simmy Brown is how tender-hearted she is. Still reeling from tragedies in her own life, she's throwing herself into her new business. Her part-time employee isn't the best fit for a florist shop, but Simmy sees the best in the young girl and doesn't look for a replacement. She also gets embroiled with the bride's family much too easily. Whenever they want to speak to her, she just can't seem to say no. Instead, she drops everything to see what they need from her. It's almost impossible not to like someone who sees the best in people and who is always willing to help-- especially when she's not doing so blindly. No, Simmy has a good head on her shoulders, and she does know how to use it.

I also learned a great deal about what goes into the running of a florist shop. Not just irritating customers, but flower ordering, wedding planning, and how to brainstorm ideas for new arrangements and display windows for the shop. Tope comes nowhere near to overwhelming the storyline with these facts, and since I'd never given any thought to this particular type of business, I found it very interesting.

The cast of secondary characters in The Windermere Witness is a strong one. Simmy's parents-- especially her mother-- are a bit eccentric, and readers can learn a bit about the bed-and-breakfast business as well. Simmy's part-time employee begins as an irritating young woman but with more shading given to her character, she becomes an important part of the cast. The winner to me, however, was seventeen-year-old Ben. Ben is intelligent, funny, and full of ideas. Simmy seems to be just the person to bring out the best in Ben, and I definitely want to see more of him.

As for the mystery itself, I have to admit that I was flummoxed. The main pool of suspects consisted of members of the wedding party, and they acted so strangely that I spent most of my time trying to figure them out, and I never did get around to trying to pin down the identity of the killer.

The lovely setting of England's Lake District, a strong cast of characters, and a puzzling mystery all lead me to look forward to Simmy Brown's next adventure!

Just a note about the publisher. William Morrow/HarperCollins now has the Witness Impulse imprint for thriller and suspense eBooks at extremely reasonable prices. One of the things they seem to be doing is making several excellent British authors available here in the U.S.-- authors like Rebecca Tope, Stephen Booth, Francis Fyfield, and Aline Templeton. Normally I have to order these books from the UK, so I'm absolutely thrilled to see them available as eBooks here!