The Wolfe Widow by Victoria Abbott 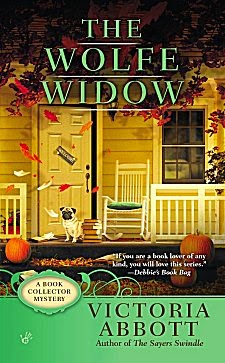 Thanksgiving is approaching, and Jordan Bingham is thankful to have a job she truly loves. Vera Van Alst may be the Supreme Curmudgeon of Harrison Falls, New York, but she's given Jordan a suite of rooms she loves, fantastic meals courtesy of Fiammetta (the cook who never met a diet she couldn't kick to the curb), and the joy of working with a first-rate collection of rare crime fiction.

All that changes when Muriel Delgado comes to stay. In no time flat, Muriel's moved in and Jordan's lost her job. The iron-willed Vera Van Alst has suddenly become a mealy-mouthed pushover, and Jordan knows something is drastically wrong. Even though she's technically unemployed, Jordan's going to do her best to save Vera and her books-- whether Vera wants her to or not.

In this third Book Collector outing, Nero Wolfe and Archie Goodwin are Jordan's role models to solve the mystery of Muriel Delgado, who's swiftly isolating Vera from anyone who could possibly help her. Vera may be without a safety net, but so's Jordan, who's recuperating from a bad accident. The only person who can possibly lend a hand is her Uncle Kevin about whom Jordan says (with great affection and a dusting of fear): "Having Uncle Kev as an ally is like playing catch with a grenade." She needs all the tricks Nero and Archie can teach her in order to save both Vera and herself.

Watching Jordan solving the mystery is a joy, due in large part to the humor in this book. The Wolfe Widow is filled with comedic touches sure to bring smiles to any reader's face. I've also learned while reading this series that one of its bonuses is being so intrigued by each book's featured classic mystery writer (so far we've had Agatha Christie, Dorothy L. Sayers, and Rex Stout) that I've started sampling-- and enjoying-- books that I normally avoid.

The only thing that bothered me was the character of Muriel Delgado. For me, she was a bit over the top, and I kept envisioning a strange combination of Cruella de Vil and Joan Crawford whenever Muriel had a scene. This woman had some serious issues that her cartoon-like description detracted from. Dial her back a couple of notches, and Muriel Delgado would've been a kickass villain. Hmmm... perhaps too kickass for a cozy mystery? I'll have to ponder this for a while.

In the mean time, it was another wonderful outing with Jordan, and I can't wait to see what she gets up to next!