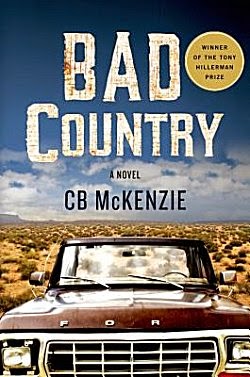 First Line: As instructed, the man stopped at a certain landmark in the desert, stripped and used the cheap folding knife to cut his dusty khakis and T-shirt into small pieces.

Finding a dead body by your gate when you return home isn't the best of circumstances, but that's what Rodeo Grace Garnet has to deal with when he turns in his drive. This ex-rodeo cowboy turned private investigator answers the questions the police ask him and stays out of their way. The only thing Rodeo knows for sure is that the dead man isn't an illegal immigrant.

Rodeo ekes out a living by divorce work, being a bounty hunter and a warrant server, and by the kindness of his friends. Needing money for gas and food for his dog, he doesn't have much choice when an elderly woman hires him to find out who murdered her grandson. What doesn't quite make sense is that Rodeo seems more concerned about the case than the old woman is, but that soon takes a backseat as he gets deeper and deeper into this and other interrelated cases. Rodeo's about to find out just how far hate can drive people to do the unthinkable.

Bad Country gives readers a real feel for how life is lived in the forgotten places of the desert far away from cities. Rodeo lives so far out that the area is called El Hoyo-- The Hole. Out here, it's important that you have friends you can trust and rely on. At first it seems as though where his friends are concerned, Rodeo is all take and no give, but the further into the story you go, you understand why these few are Rodeo's friends.

This book doesn't follow the rules-- just like Rodeo. There are no quotation marks, and a lot of this book is dialogue. There are no chapter headings. Instead there are breaks between scenes. Some Spanish is spoken, and it's not always translated. You know what? It doesn't matter one little bit. I had absolutely no problem knowing which character was speaking, and the breaks between scenes instead of formal chapter headings made perfect sense. As for the Spanish, what words I didn't immediately recognize were easily decipherable just by reading the next line or two.

There's a popular rule in writing: Show. Don't tell. I've seen few writers follow that rule as closely as C.B. McKenzie. None of Rodeo's friends are going to tell you a thing about him. It's up to you to form your own opinion as Rodeo goes out into the desert around his property to leave water for the illegal immigrants traveling through this inhospitable land. It's up to you to see how he treats his old dog. It's up to you to watch him become more concerned about the death of a young boy than anyone in the boy's own family. As Rodeo investigates, he never takes the word of someone else about anything-- he goes to that person, speaks with him, observes his behavior, and forms his own opinion.

This adherence to "Show. Don't tell." is like a breath of fresh air. It provides a depth of clarity and characterization that is difficult to describe but a joy to experience. All I know is that I was sucked into this story, and I didn't want it to end. I want more Rodeo Grace Garnet.