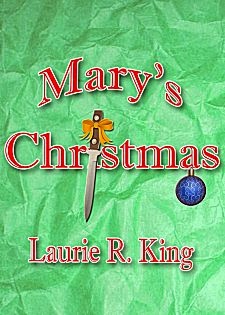 First Line:  Every little girl should have an Uncle Jake.

It's a cold winter's evening along about 1921 or 1922, and Mary Russell and Sherlock Holmes have settled in by the fire. They've been sharing stories about their past when Mary decides to tell Holmes about her Uncle Jake-- a relative that Holmes didn't even know existed.

Every child needs an Uncle Jake: a charmer and a scoundrel, Jake lives by his wits and loves to swoop in with wildly inappropriate gifts. Mary and her brother adore him-- especially when one of his plots leads them into questionable ethics and a bit of danger.

This is just the sort of story to share on a cold winter's night by the fire. Listening to the logs pop and crackle is the perfect time to read a bit more about the sort of little girl Mary Russell was. You'll find out that she hasn't changed much over the years, and I just have to admit that there's something about Uncle Jake that makes me smile and want to join in the fun.

When you have favorite literary characters, you always want to learn more about them, and "Mary's Christmas" satisfies that craving.