Dae's Christmas Past by Joyce and Jim Lavene 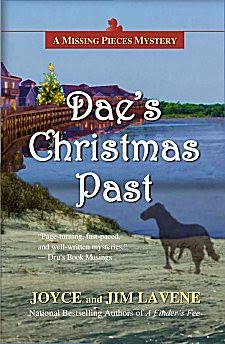 First Line: The Currituck Sound had a smooth, glossy surface leading to the horizon as I walked down the boardwalk.

The election is over, and Dae O'Donnell has some parties to attend. Mary Catherine Roberts, well-known pet psychic and former Duck, North Carolina, resident has returned with messages for Dae, and her presence puts a spring in Dae's grandfather's step. Big Christmas plans are afoot to bring lots of people to the small town in the off-season, and vacancies have to be filled on the town council. But before work on any of this can get started, strange things start to happen.

Large herds of wild horses stampede through town in the wee hours of the morning, making noise and leaving a large swath of destruction in their wake-- but although these creatures can be heard and felt, no one can see them. Dae knows that they're tied in with the horse statue that archaeologists are uncovering outside of town and that they're bad news. When wild horse rescue director Tom Watts is found dead in the middle of the road and Dae's friend Jake Burleson is accused of his murder, Dae knows she has to work fast before even more death and destruction comes to her beloved town.

This Missing Pieces cozy/paranormal series has been one of my favorites from its inception. I love the small town setting of Duck, North Carolina, on the Outer Banks and how the authors have woven the area's history into the storylines. Joyce and Jim Lavene also do a wonderful job in showing what it's like to be mayor of a small town in troubled financial times, and how people in a community can come together to make the town-- and their lives-- better. Normally readers pick up books like these and read about the problems, but don't see much in the way of finding and implementing solutions.

I've also come to care a great deal for Dae, her grandfather, her boyfriend, and other characters in her circle of friends and acquaintances. The paranormal hook appealed to me as well: Dae's ability to hold objects and "see" their history, or to have people come to her for help in locating missing things and her being able to find them simply by touching the person. We even have a new character in Dae's Christmas Past: Mary Catherine Roberts, who first appeared in the  Lavenes' The Telltale Turtle. Roberts can talk to and listen to animals, and in this book, flocks of them have plenty to say to her. I liked Mary Catherine, but other than providing a romantic interest for Dae's grandfather, she really didn't have all that much to do. Telling us several times throughout the book that the animals were worried and afraid doesn't make her vital to the plot. It will be interesting to see how her role adapts in future books.

I've been telling you about all the things I've liked about this book and the series as a whole, but I've been avoiding the elephant in the room. (Mary Catherine would've told you what the elephant had to say by now.) I'm more than willing to go wherever authors want to take me. I like to see how they introduce new elements and how they can push the envelope. More often than not, I enjoy these changes-- but sometimes I don't, and this is one of those times.

The plot hinges on a prehistoric horse cult on the Outer Banks. This was introduced a book or two ago, and I have to admit that I eyed it nervously. I was right to, at least for me. Dae's developing psychic abilities and her testing their boundaries has kept me interested, but I just could not buy into this horse cult. When the ringleader of the reborn cult was revealed and began to spout rhetoric, the character sounded straight from a James Bond film-- just another megalomaniac trying to take over the world. It just didn't fit. It just wasn't Duck.

There's still a lot that I like about this series, but I have to admit that I'll be looking forward to the next book, not only with anticipation, but with a big dollop of apprehension as well.