The Fourth Secret by Andrea Camilleri 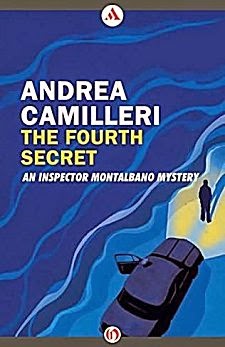 First Line: Why did he find himself, at about three in the morning, hiding in a doorway, following Catarella's movements?

Inspector Salvo Montalbano's sleep is being disturbed by dreams, but his waking hours are soon filled with a murder investigation. Someone in the area has a blatant disregard for safety regulations, and six people have died in the past month as a result of workplace "accidents." Montalbano's highly developed nose for trouble tells him that these deaths are not accidents, and he's determined to find out what's really going on.

Once again, Andrea Camilleri has written a brilliant short story that's a perfect addition to his Montalbano canon. This little investigation is sure to please his fans as well as entice new readers with its deft plotting and wonderful characterizations. What is certain to thrill long-time fans the most is the fact that Montalbano works a case with the inimitable Catarella. Mimi is busy investigating a series of break-ins, and since Montalbano insists on working a case that's not in his jurisdiction, Fazio doesn't want a thing to do with it. So Montalbano is left with Catarella which means there's even more humor in this story than usual, and some of it is hilarious slapstick.

I only have one small complaint about "The Fourth Secret"-- it isn't translated by the superb Stephen Sartarelli. This translation by Rizzo and Siracusa works well, but it's a bit like stepping down to a Ford Focus when your normal ride is a Ferrari. Those readers who are used to Sartarelli's work on Camilleri's novels will notice the difference.

But it's a small quibble, and I would not have missed a chance to watch Montalbano and Catarella working together for the world!