For the Dead by Timothy Hallinan 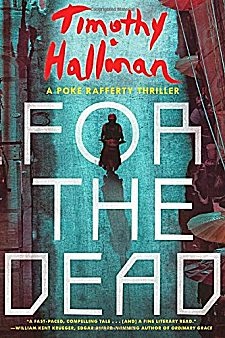 First Line: The river is wider than it should be and it's the wrong color.

Poke Rafferty's thirteen-year-old adopted daughter Miaow is friends with Andrew, a Vietnamese diplomat's son. When Andrew loses his second iPhone in two weeks, he knows his father is going to turn it into a learning experience, which he wants to avoid at all cost. Miaow, a former street child, takes him to the Little India section of Bangkok where they purchase an identical phone.

But when Andrew starts scrolling through the photos on the phone, there are pictures of two former dirty cops-- men who are murdered a couple of days later. Now both families are in mortal danger, and Poke may have to rely on someone who has already betrayed them in the past to save his family.

I can remember being blown away by the first book in this series, A Nail Through the Heart, and each successive book gets even stronger. If the fourth book in the series, The Queen of Patpong, can be considered Rose's book, then For the Dead is Miaow's. Hallinan does a superlative job at portraying an extremely vulnerable teenage girl, filled with self-loathing, who has her carefully invented persona ripped from her. And when she believes that Poke and Rose are keeping an important, life-changing secret from her, where is she going to go? What is she going to do? I literally feared for Miaow as the story progressed. The men who are looking for her will stop at nothing. They will kill as many people as it takes to get the result they want.

At the beginning for the safety of the two children, Poke has to rely primarily on two sources: one trusted, the other new and unknown. Thai police officer Arthit helps him as much as he can-- as he always does. When asked how he can put up with the widespread corruption on the Thai police force, Arthit says that it's because, once in a while, he's allowed to do the right thing. Just the type of person you want when you're in a tight spot, especially when you're dealing with a murder-for-hire ring that had been operating inside police headquarters. The other source Poke must rely on is young Andrew's father, and I enjoyed how this man's character was revealed as the story progressed.

One of the strengths of this book (and the entire series) is its honest portrayal of Thailand, both from Poke Rafferty's outsider's point of view and from Thais like Rose, Miaow, and Arthit. Thai culture is ancient and highly stratified, and Hallinan is very adept at showing it in its depths of ugliness and in its overwhelming beauty.

Even though there are repeat characters from previous books in the series, For the Dead can easily be read as a standalone for those of you who don't want to get involved with an entire series. For those who love rich characters and settings as I do, don't be surprised if you read this one and immediately start looking for the others.

This is one of the finest crime fiction series going right now, and For the Dead is the best one yet. Two scenes linger on in my mind: the confrontation between Rose and Miaow is so emotionally powerful that it brought tears to my eyes. Rose's humor and wisdom are sublime-- and Miaow is every bit as special as Rose. The second scene? The one in which Poke sits in a room in their apartment and listens to two women laughing. What a simple scene that conveys so many layers of emotion!

Tim Hallinan, thank you from the bottom of my heart for creating these characters. They are, quite simply, wonderful.