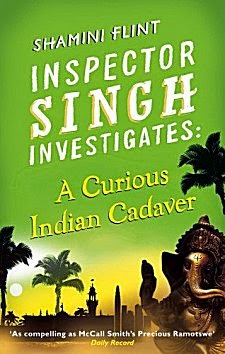 Unfortunately our Inspector Singh of the snowy white sneakers is on compulsory sick leave from the Singapore police, so he can't plead work and escape accompanying Mrs. Singh to India for a family wedding. When the couple arrives in Mumbai, they learn that the bride-to-be has disappeared, and since the last thing the family wants is publicity and police involvement, Singh is asked to conduct a discreet search.

Convinced that the young woman ran away to avoid an arranged marriage, Singh begins interviewing those who knew her best. His investigation takes on a much more serious turn when a corpse is found. Now he's conducting a murder investigation-- with absolute instructions from his wife (she of the "Stalinist tendencies") to cast no blame upon her family. The one thing Inspector Singh knows as he begins to descend through layer after layer of deceit is that it's going to be far from easy to obey his wife.

Shamini Flint has created a series that I love to read. The character of Inspector Singh is the perfect blend of humor and intelligence, and there's the added bonus of following him from case to case throughout Southeast Asia. In many ways this series is comparable to Tarquin Hall's which is set in India and features private investigator Vish Puri. Both give Westerners insight into incredibly rich cultures so very different from their own.

A Curious Indian Cadaver begins with an emotional blockbuster of a scene set in 1984 immediately after the assassination of Indira Gandhi. When the news spread that she was killed by her Sikh bodyguards, it led to massive reprisals against anyone of that religious faith. This scene casts a long shadow of foreboding over the entire book. Any reader will know that what happens will never be forgotten. There will be consequences.

This fifth book in the series lets us see much more of the dreaded Mrs. Singh, a woman of the strongest opinions who is the main reason why the inspector loves to be constantly on the job. (She's a marvelous cook, so he does like to be home at meal time however.) Readers get to see how this odd couple fits in with their relatives in Mumbai-- those family connections which are so all-important in India-- and it gives Mrs. Singh a chance to see her husband in action... even to put herself in his shoes for a second or two. After being in her company for such an extended period, the inspector begins to see his wife in a different light as well. Will they get along better in future? Only time will tell.

The powerful opening scene that I mentioned earlier in many ways weakened the mystery for me. I knew that "payment" was due for 1984, and that made certain aspects of the plot rather predictable. But as I've stated in other reviews, the best crime fiction isn't merely about crime. It's also about characters, setting, and motivations. A Curious Indian Cadaver brought India to life for me and gave me a greater appreciation of its culture. I thought about how some people never seem to realize that two wrongs don't make a right, as tired as that phrase may be. It also allowed me to spend time with one of my favorite characters. Inspector Singh never ever disappoints!