Burying the Past by Judith Cutler 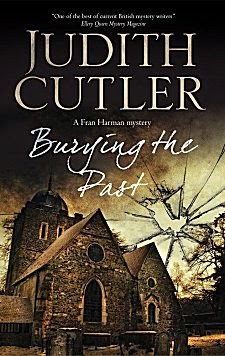 In the midst of preparations for her wedding, the last thing Detective Chief Superintendent Fran Harman needs is a skeleton in her garden, but that's exactly what is unearthed. Not only could the discovery disrupt her wedding, it's slowing down the renovations on the house she and her husband-to-be plan to move into as quickly as possible. Even an epidemic of metal theft is slowing down those renovations.

And when it rains, it pours. Fran is also dealing with the suicide of a fellow officer, a young woman who claims she stabbed the man who raped her, and the incomprehensible behavior of her fiance's two grown children. She's also got to be able to lend a helping hand to the newly promoted police officer who's digging up the skeleton in her garden and trying to undo the renovations on her house. Will it ever end?

I have been a fan of Judith Cutler's Fran Harman series since the very first book. Fran is such a wonderful blend of intelligence, determination, empathy, and risk taking that I just can't read enough books about her. In all the fiction that I have read, this character is my favorite boss, and there's been a time or two when I wished that she were real so we could be best friends. As you can see, Fran has had quite an effect on me after four books!

There are crimes to solve in Burying the Past, and speaking of that title, there are plenty of characters-- including the house itself-- who have either buried their pasts or are trying to. There are even characters here who have appeared in other novels by Cutler-- like Caffy Tyler from Scar Tissue and Lina Townend who has her own series. You can read this book perfectly well without even knowing that these characters have lives of their own in other mysteries. They carry out their tasks here in fine style and add a bit of zest for Cutler's fans.

In the midst of people trying to take over the plans for Fran's wedding and Fran trying to keep all the various investigations straight, the reader soon realizes that this book has less to do with crime solving and more to do with tying up many of the loose ends of Fran's and Mark's lives so they can make a happy start to their new one together. This may irritate some, but as invested as I am in these characters, I really didn't mind a bit-- especially since so many of the investigations actually do tie in with these two retirement-age people who love each other so deeply.

Burying the Past definitely puts an enjoyable Paid In Full to some questions that have lingered for a book or two. What I like in particular is that Cutler does it in such a way that someone who's never read a Fran Harman mystery before can pick this one up and begin reading without feeling lost. When I'd savored the last page and closed the book, I was left with two things: a big smile, and a feeling of excitement. I have to find out what Fran's life has in store for her next!