Sons of Sparta by Jeffrey Siger 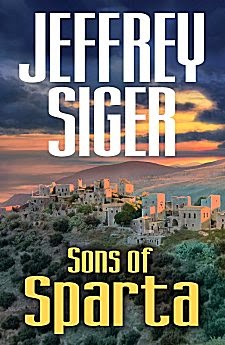 First Line: As he drove along down the highway the tune kept running through his head.

The Mani-- the tip of the mountainous Peloponnesian Peninsula of Greece-- is filled with a rich history of Sparta and her fabled warriors, of piracy, of highwaymen, and of a people who fiercely repel anyone foolish enough to attempt to occupy it. It is also a land where families have a strict code of honor and vendettas are a way of life. Even the farm houses look like fortresses on the Mani.

It is back to this world that Special Crimes Division Detective Yiannis Kouros must go when summoned by his uncle. Kouros fears that he will be pressured to participate in some new vendetta and that his loyalty to his boss, Chief Inspector Andrea Kaldis, will be tested because Kouros's uncle was once the head of the Mani's most prominent criminal enterprise. But his fears come to naught. He is simply told that the family is about to become rich through the sale of its property. However the deal falls through when Kouros's uncle is killed. Kouros has to act fast to solve the case before a new vendetta begins, and he's successful-- until Kaldis's probe into government corruption back in Athens leads straight back... to the Mani.

This satisfying sixth Andreas Kaldis mystery is quite a change of pace from the high octane, adrenaline-charged action of its predecessor, Mykonos After Midnight. Once again author Jeffrey Siger highlights an area of Greece and weaves its history and culture into his narrative; this time the very tip of the Peloponessian Peninsula which will be familiar to many once Sparta is mentioned. Many readers (and devotees of The Godfather films) are familiar with vendettas being a way of life in Sicily, but what may surprise them is that vendettas are just as important in the Mani. One of the things I found so fascinating about Sons of Sparta is the code of conduct surrounding vendettas in that area. There are rules, and they must be obeyed.

It is Kouros's show in this book, with Kaldis and Tasso working on the periphery, and it's quite a tangled investigation, but there is still plenty of the comraderie and humor that are Siger's trademarks. And as for trademarks, the author's ability to portray what is currently happening in Greece is as strong as ever. Greece is a country in severe financial difficulties, and the foreign criminal elements arriving in an attempt to carve up lucrative "business deals" for themselves is sickening-- reminding me of vultures fighting over the best morsels before the animal has even died. What is heartening is that Siger also shows that there are men and women who are dedicated to doing what's right even if it comes at high personal cost.

Jeffrey Siger's books are a feast for the mind and the senses: an intriguing mystery to solve, one of the best teams of detectives in all of crime fiction, and a wonderful setting all skillfully blended with action, humor, and a touch of steamy sex. I know that I'm preaching to the choir with many, but as for those of you who have yet to read a mystery by Jeffrey Siger... what are you waiting for?