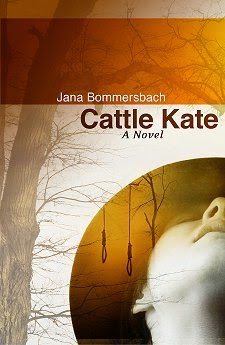 First Line: I never thought I'd die like this.

In Wyoming Territory on July 20, 1889, Cattle Kate became the first-- and only-- woman ever lynched as a cattle rustler. When news of the lynching reached Cheyenne, newspaper reporters were quick to label her as a worthless thief and a filthy whore, and that's how she's been remembered in the history books for the past one hundred twenty-five years. But there's a problem with that.

It was all a lie.

In award-winning author Jana Bommersbach's meticulously researched novel, the lies are exposed and the truth comes to light. Cattle Kate was a twenty-nine-year-old homesteader named Ella Watson who was lynched alongside her husband by rich and powerful cattle ranching neighbors who wanted her land and its water rights. Ella wasn't a thief, and she wasn't a whore-- and she'd never been called Cattle Kate until she was dead and her killers needed a coverup.

What I've said so far is enough to get anyone's blood up-- the incredible injustice done to this woman!-- but it gets worse. Some people knew what really happened, but the Wyoming Stock Growers Association made sure their voices were not heard. Anyone who had the courage to speak out-- including the eyewitnesses to the hangings-- either disappeared or died suddenly. Ella Watson's killers walked away scot-free.

Bommersbach literally grabs readers by the throat on the very first page. Ella Watson is slowly strangling to death. Trying to grab the rope. Kicking out furiously for some sort of purchase in order to free herself. Certain that the men who are watching will realize it's time for the joke to end. Determined that this is not her time to die. This is an amazing opening to the book, and an unforgettable one. It's an opening that immediately puts the reader in Ella's shoes and on Ella's side.

What follows is Ella's account of her life. Moving with her parents and all her brothers and sisters from Canada to Kansas to start life anew. It's a story of heartbreak, of hard work, of sacrifice, and of sheer determination. Ella moves on to Wyoming Territory, intent on filing a homestead claim and working hard to own her own property. She's known for her sewing, her cooking, and her kindness. But as her story progresses, a strong feeling of dread begins to creep in. Ella and her husband Jimmy are honest, forthright people who believe in doing what's right and in speaking their mind. Being homesteaders in the middle of cattle country... well, speaking your mind isn't always a wise thing to do. At least it wasn't back then, and Ella and her husband paid a terrible price.

Bommersbach's narrative is powerful. Ella is an extremely likable woman, and knowing what's going to happen doesn't make it any easier to read. Actually Ella's character makes it more difficult because the reader wants desperately to prevent the lynching from happening. But the very least this woman deserves is justice, and the author has given it to her. If there's any drawback to Cattle Kate, it's the fact that a sizable portion of the book is taken up by historical notes that prove how diligently Bommersbach did her research. These notes are important, but the author's writing is so visceral that I wanted more Ella, more story-- not pages of research.

Having already read this author's previous non-fiction Bones in the Desert and The Trunk Murderess: Winnie Ruth Judd, I just knew that she would also be able to write incredible fiction. I was right, and I hope to read more.