The Low Road by A.D. Scott 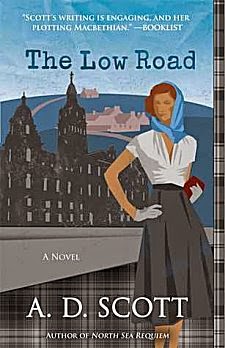 First Line: He shuddered as he got off the bus outside the main gate of the former Duke Street Prison.

John McAllister has come to the mean streets of Glasgow on a mission to find his friend, Jimmy McPhee. McPhee has disappeared from sight, and since he is involved in some sort of blood feud with a gang there in the city, McAllister intends to use his old newspaper contacts to see if he can find his friend.

Although he's ashamed to admit it, he's relieved to be back in Glasgow and feeling the allure of a big city newspaper. Joanne Ross, the woman he loves in Inverness, is still recuperating from serious injuries. She's not really the woman McAllister fell in love with... but he doesn't really want to think about that. Instead he teams up with a young crime reporter who has her eye on the Big Time. In trying to track down Jimmy, the gang finds them, and now McAllister is in danger of losing everything-- and everyone-- he loves.

Although I missed being in Inverness in this latest Highland Gazette mystery, I rapidly came to appreciate the visit to some of 1950s Glasgow's most dangerous areas.

It's also an opportunity to see McAllister on what used to be his home turf and to observe the way he behaves with family, friends, and former work colleagues. Moreover, what readers observe isn't always flattering. McAllister-- a lifelong bachelor and rather set in his ways-- is finding it very difficult to cope with the changes in Joanne Ross. Although he thought he loved her beyond all reason, the difficulties she's experiencing with her health have him wondering if they really should get married. For anyone who's followed this marvelous series since book one, his behavior is almost like a slap in the face. Granted, it's only natural for him to have these doubts-- and it shows how A.D. Scott has created nuanced characters who live and breathe on the pages of her books.

She also knows how to create a level of menace and danger that keeps your eyes glued to those pages. Although I truly feared for McAllister's life on more than one occasion, I still felt that The Low Road suffered a bit from the characters being split apart. This is such an ensemble cast that the flow of the book felt a bit out of kilter from time to time.

Scott gives us a real feel for Scotland in the 1950s by showing how some of the old-fashioned Calvinist ways are very gradually being ground under by modern ideas and behaviors. As in tune as she is with the land and the times, it's with her characters that A.D. Scott truly shines. These are characters who embrace both the good and the bad. We're able to learn their strengths, their weaknesses, and some of their motivations. There's a lyrical and oh-so-human quality to this author's writing that reminds me of Louise Penny, and-- as I am with Penny's books-- I'm always thrilled to see a new Highland Gazette mystery.