The Edison Effect by Bernadette Pajer 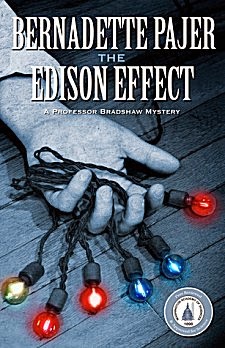 The University of Washington's Professor Benjamin Bradshaw isn't thrilled when he learns why Thomas Edison wants to see him. Edison not only is an absolutely ruthless businessman, he's always on the lookout for new ideas, new inventions, and new patents. This time he's in Seattle to find an invention that was lost in Elliott Bay, one that Bradshaw hopes will stay lost. As a result of his convictions, Bradshaw refuses to help Edison-- something very few people are brave enough to do.

But Bradshaw's attention turns from Edison to murder when a man is found dead, holding a string of Edison's new holiday lights, in the Bon Marché Department Store's menswear window. There's only one problem: Bradshaw's mind is not on murder, it's focused on matters of the heart. The courtship of the woman he loves will either force him to defy his faith or to lose her. This murder investigation is also going to force him to make a choice. Whatever the outcome of either dilemma, Bradshaw is at a crucial turning point in his life.

I enjoyed The Edison Effect, set in 1903 Seattle, from first page to last. Bradshaw is just the type of character I like: flawed, extremely intelligent, principled, and brave. I love watching how his mind works when he's tinkering with his inventions or when he's trying to deduce how electricity plays a part in murder. But Pajer's series isn't merely a gadgets and gizmos treat for the technically intrigued; there's plenty of interaction with other people like his young son, his housekeeper-- and of course the delectable and emancipated Missouri. How Bradshaw has dealt with the death of his wife and the raising of his son tells a lot about him as a person, and the fact that the death was so traumatic means that everyone close to him has had to come to terms with it, too. These relationships are one of the reasons why I keep coming back for more.

Pajer also brings the sights, the sounds, and the smells of turn-of-the-twentieth-century Seattle to life which, along with the inventions and a truly puzzling mystery, will satisfy any lover of historical mysteries. In addition, Pajer's accurate portrayal of Thomas Edison may surprise some readers if-- like me-- what they learned in school gave them the impression that Edison was some sort of god and surely couldn't do anything wrong.

If you enjoy historical mysteries with rich characterization and precursors of our own technological age, I urge you to treat yourselves to Bernadette Pajer's Benjamin Bradshaw mysteries-- even if you're a technophobe. They really are something special.