The Darling Dahlias and the Cucumber Tree by Susan Wittig Albert 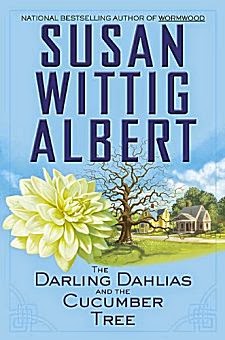 First Line: Elizabeth Lacy had been a member of the Darling Garden Club ever since Mrs. Blackstone started it in 1925, and president for the last two years.

It's 1930 in Darling, Alabama (population 907), money is scarce, and everyone is making do. The ladies of the Darling Dahlias Garden Club are looking forward to sprucing up the neglected gardens of their new clubhouse, which they inherited after the club's founder, Mrs. Dahlia Blackstone died. However, there's plenty going on in town to distract them.

There are rumors floating around that the Darling Savings and Trust may be in trouble, and there's been a prison break, but what has the lion's share of club president Elizabeth Lacy's attention is the disappearance of drugstore clerk, Bunny Scott.

Bunny was known to be flighty and man crazy, and she was always talking about moving to New York, but Liz Lacy and fellow club member Verna Tidwell know good and well that a woman doesn't leave for New York City and leave all her clothes, jewelry and cosmetics behind. When Bunny turns up dead in a stolen car, the Darling Dahlias decide to do some investigating on their own-- even if a ghost does seem to be digging around the old cucumber tree at night.

Susan Wittig Albert almost immediately transported me to Depression-Era Alabama in this first book in the series. She's done her research, and her mentions of songs playing on the radio and the movies that were showing at the theater in town created a lot of the needed ambiance. Her research shows up everywhere-- in the prices people were paying for things, in their recipes, in the fear that swept through the community when rumors of a bank closure and a prison break began to circulate-- and all these details fit into the story seamlessly.

Add an intriguing mystery to a perfect setting, and you've got a good book to read. In fact there are several little mysteries running throughout this book. Some are easily solved, but others require much more thought and deduction.  What raises the bar even higher is Albert's cast of characters. The main garden club members come from all walks of life-- there's the mayor's wife whose husband is always telling her not to worry her pretty little head, there's a legal secretary, a probate clerk, and women who run the local diner and moonlight as telephone operators. If these women don't have their fingers on the pulse of Darling, Alabama, then no one does!

We get to know Lizzy Lacy the most in this book, and I like her a lot. She's what would have been called a spinster back then, since her domineering mother got it into her maternal head that Lizzy was going to be her live-in doormat forever more. But lest you get the idea that Lizzy has no spine, think again. I guarantee you're going to like her. I look forward to learning even more about the rest of the characters because just enough of their backgrounds were given to let readers know that there's much more to their stories, too.

Albert also includes "making do" tips and recipes at the back of the book, and reading them brought back many memories for me, having grown up with a grandmother and mother who lived through the Depression. And although I did notice the slow pace of the book throughout the first half, I just chalked it up to setting the stage for this new series. History, mystery, characters, food, music, and flowers. I'm already looking forward to the next book!