The Bookseller by Mark Pryor 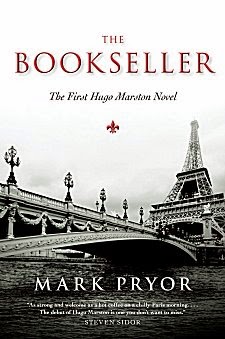 First Line: The largest of Notre Dame's bells tolled noon just as Hugo reached the end of the bridge, the brittle air seeming to hold on to the final clang longer than usual.

Hugo Marston, head of security at the U.S. Embassy, enjoys his posting in Paris, and has made friends-- or as much as he can-- with irascible old Max, a well-known bouquiniste (bookstall owner), who can usually find the books Hugo is looking for. When Hugo is forced to stand and watch Max be kidnapped at gunpoint, he is determined to find the elderly man before it is too late. When local police insist there has been no kidnapping, Hugo takes some time off to conduct his own search with the help of his friend, semi-retired CIA agent Tom Green.

When the two men learn more of Max's background, they don't know if he was kidnapped because of the books he sold or because of his past. Then other bouquinistes begin to disappear only for their bodies to be discovered later floating in the Seine. Hugo himself becomes a target, and he's going to have to find some way to convince the police to become involved.

I enjoyed The Bookseller for its window into Parisian life and for the background it provided of the bookstall owners. I've seen so many photographs of the bouquinistes, yet this is the first time I've read anything of their history. It was fascinating.

Unfortunately, the rest of the book wasn't on par with its insights into Paris and one of its institutions. Having deduced what was happening to the booksellers and why very early on, I wondered how long it would take Hugo Marston to put the pieces together. Too long, as it happens. Moreover, Marston himself never really clicked as a main character for me, and neither did his friend Tom Green. Both have promise, but both lacked that indefinable spark that would bring them to life.

Now that I've said all that, I will say that this is a promising debut mystery, and I am more than willing to give the next book in the series a try.