Trust Your Eyes by Linwood Barclay 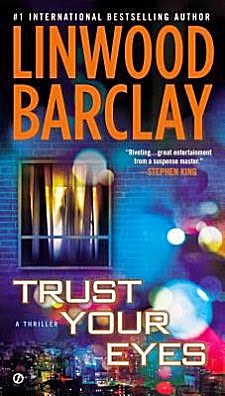 First Line: It was just by chance he turned down Orchard Street and saw the window when he did.

Ray Kilbride has come home to Promise Falls, New York, to take care of the details of his recently deceased father's funeral and will-- and to see that his schizophrenic brother Thomas has the proper care. It's not going to be easy. Thomas spends almost his entire day on his computer logged into Whirl360, his self-appointed task to memorize the details of every street in every city.

When Thomas sees what he believes is a woman being murdered in an apartment window in Manhattan, he insists that Ray do something about it. Ray is well-acquainted with his brother's illness, and he knows that if he doesn't make at least a token effort, Thomas will make life impossible. But what Ray doesn't realize is that, by going to the art supply store and stopping by a Manhattan apartment building, the world is going to come crashing down on the two Kilbride brothers.

Many readers think of thrillers as the wham, bam, thank you ma'am genre, with everything sacrificed to an adrenaline-charged plot. That's not the type of thriller that Linwood Barclay writes. Trust Your Eyes is filled with wonderful, nuanced characters and a thick, meaty plot that knows when to take it nice and easy.

Thomas's illness is sympathetically and realistically drawn. His memory is prodigious, his routines are set in stone, he can be charming, frightening, infuriating, and endearing. No less real is his older brother Ray, who's made a home and a career for himself away from his father and brother. When he finally loses patience with his brother, it's all right, because we've lost patience, too. When he feels shame for giving in to his anger and feeling of hopelessness, we do, too. Barclay has drawn us completely into the lives of these two brothers.

And these two (basically) ordinary men are rapidly drawn into an extraordinary, life-threatening situtation. The author has created a tightly woven mesh of subplots. There's the worry about Thomas and his obsession with Whirl360 and talking to people who aren't there. Did he really see a murder? Who was murdered? Who are the killers? Is there something wrong with that riding lawnmower at the bottom of the slope? So many questions unfold themselves and spread their wings that you'd think I'd get hopelessly lost. But no, I didn't because I was so immersed in the story that I remembered every character, every plot twist, and I read faster and faster to see how Barclay would bring all these elements back into some sort of resolution.

The mood in Trust Your Eyes gets increasingly tense, and it was good to see the flashes of Barclay's humor that I enjoyed so much in his Zack Walker book, Bad Move. The author knew to place his hilarity in just the right spots so it would surprise a laugh out of the reader and relieve the almost unbearable tension.

I don't know what kept me away from Linwood Barclay's books for so long, but I do know one thing: I've got a lot of good reading ahead of me as I catch up.