Scene of the Climb by Kate Dyer-Seeley 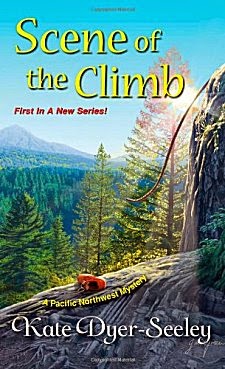 First Line: My fingernails dug into the soggy dirt as my body lurched closer to the sheer cliff face.

Unemployed journalist Meg Reed is camping out on her best friend's couch when she gets the opportunity to apply for a position at Northwest Extreme magazine there in Portland, Oregon. Lying through her teeth about her outdoor sports skills, she gets the job and eventually finds herself scrambling up steep trails to cover a reality TV adventure show.

Climbing a 2,000-foot mountain peak absolutely terrifies her, but when she witnesses someone plummet off the cliff, Meg discovers that she has a murder to investigate-- because the killer thinks Meg has seen too much.

This is the beginning of a new cozy series that shows a lot of promise. Meg is a good-hearted, and sometimes bumbling, young woman fresh out of college who's always wanted to follow in her talented father's shoes as an investigative journalist. Her best friend Jill has a nice apartment in Portland and is more than willing to put up with Meg's slovenly ways. There are suitable romantic interests for our heroine, and Dyer-Seeley has created a cast that should stand up well to future adventures even if it does contain my least favorite character-- the impossible mother.

The Portland setting with nearby sites and hiking trails made me want to go up there and experience it for myself. Scene of the Climb is a nice blend of the traditional cozy and an adventure with an edge to it, and the series should do well-- especially if a couple of things are addressed.

Meg being a couch potato who has to go out there and learn outdoor skills is going to have a wide appeal among readers; however, I found two of her behaviors to be rather disturbing. She doesn't seem to have a complete understanding of the word "deadline" although she certainly has time to go out for coffee or meals with her friends. This might just mean that I haven't fully recovered from being one of those Type A personalities, but the other thing well and truly drives me up a wall. Without going into too much detail, she knows that her life is in danger, but instead of exercising at least a bit of common sense and caution, Meg just keeps going out to test her luck.  Not. Good.

The other thing that bothered me is something I normally do not mention, but I feel I have to here. Incorrect punctuation a time or two, the wrong word in a sentence... if they happen less than five times in a book, I ignore it. But it happened over and over and over in this book. The proofreading and editing were abysmal. Countless instances of missing or extra words, "air" being used instead of "err," and a scene in which Meg was called first thing in the morning to meet someone who was an hour away. Meg left almost immediately, but as she was driving non-stop to her destination, the sun had set.

As I said before, this series has a lot of promise. I'm hoping that Meg locates her common sense, and that the next book is edited more carefully because then the promise will begin to be realized.