@ The Poisoned Pen with Linwood Barclay! 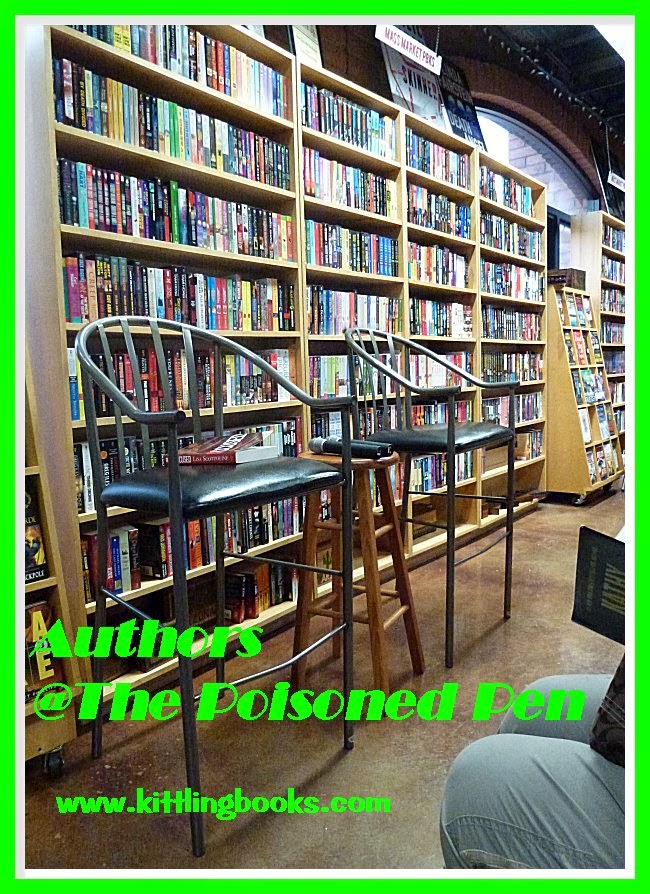 Have you ever kept coming across an author's name, read synopses of his books, thought to yourself, "I really think I'd like these," and then slowly sank under your tsunami of books and forgotten all about it? I have. Many times. And if you have, too, then as a fellow bookaholic you feel my pain.

This is exactly what happened to me with Linwood Barclay-- over and over again. I even got my hands on a copy of his first book about five years ago, and it's been languishing on my to-be-read shelves ever since. So... when I saw his name pop up on the events list at The Poisoned Pen, I knew going to see him would prove to be the catalyst that finally got me to take that book off the shelf and read it. Boy, when I'm right, I'm right!

Host and bookstore owner Barbara Peters looked bright and chipper as she walked into the store. Having seen her photo in Shelf Awareness a couple of times recently, it was easy for me to see that she'd enjoyed the time she spent in Santa Fe. She loaded down the table with all sorts of goodies, and in no time flat it was time to get the show on the road.


It was going to be a bonanza night at The Pen, with a huge basket of cookies from the Arizona Biltmore to hand out to the crowd, a $50 gift certificate to the Biltmore, an advance reading copy of Louise Penny's The Long Way Home, and other books to raffle. But all that was going to happen at the end, and it was time to talk books with Barclay.

Peters and Barclay met at the Frankfurt Book Fair, and this was the author's second appearance at my favorite bookstore. He immediately told us of a new three-book deal that he has with NAL/Penguin that's something new for him: a trilogy. "The first book has already been sent to the publisher, and I'm about three-quarters of the way through the first draft of the second," Barclay said. "I'm trying to write them closer together because I figure I'll be writing the third one and think of something I need to put in the first one. I've only got until the end of the year to tinker with the first one. They'll be coming out one per year. The joy of writing them closer together is that then I'll be able to lay down for a year and a half. Just go into a bit of a coma for a while."


Barclay had written four comedic thrillers featuring paranoid science fiction writer Zack Walker, but they didn't sell very well. His agent told him that he needed to do something different. "You need to do something darker, a standalone thriller with a great hook."

At 4 or 5 AM, Barclay woke with an idea. An idea about a 14-year-old girl who has an older boyfriend her family disapproves of. She goes out on a date with this boyfriend, she comes home drunk and has a big row with her family. She goes to bed and passes out. When she wakes up in the morning she discovers that her father, her mother and her brother have all disappeared without a trace. Twenty-five years later, the girl is still looking for answers... and she's about to find them.

When he called his agent with this idea, she loved it. "That's it! It's a great idea! What happened to the family?" Barclay replied, "I have no idea!" All this turned into No Time for Goodbye, his breakout book.

"It's not in all of them, but it is in quite a few. I think what happens in a thriller has to matter, and what matters more than something happening to a loved one?" Barclay said. "Someone I worked with at the Toronto Star said that I write about this because I lost my father when I was sixteen. I thought about it. Maybe. I don't know.  I think that-- at heart-- I'm a very anxious person, and one of the great sources of anxiety for parents is waking up at 3 AM and not knowing where your kid is."

Options have been taken out on Barclay's books, but nothing has happened so far. "I'll believe it when I'm sitting in the theater and it comes up on the screen," he quipped.

"I thought you'd believe it as you went to the bank," Peters replied, and Barclay laughed.

"Someone told me that-- I think it was-- Harlan Coben said the way it is for authors in Hollywood is that you picture a very tall fence. As the author you approach the fence and throw your book over the fence, wait a couple of seconds, and the producers on the other side throw an envelope with a check in it back over the fence, and then you never see each other again."

In speaking of the other options that have been taken out on his books, Barclay mentioned that No Time for Goodbye has been optioned by French television, and that fellow Canadian author Giles Blunt is currently writing a screenplay for Canadian television. AMC has also contacted Barclay about his book coming out next year as a possibility for a series. He hasn't heard anything since.

"Did you catch the reference?"

If Barclay were asked to name an all-time favorite author, Ross Macdonald would immediately come to mind. "I love Lew Archer," the author admits. In fact, Barclay conducted a long correspondence with the crime fiction writer while he was attending university and eventually met Macdonald and his wife. One of the things he most remembers about reading Macdonald's books is thinking, "These characters are as messed up as my family!"

Barbara then asked him about his book Trust Your Eyes, which his UK publisher called "Rain Man Meets Rear Window." The novel is loosely based on Barclay's schizophrenic older brother who has been obsessed with languages for most of his life. In Trust Your Eyes, the main character is also schizophrenic, and he spends every waking moment traveling the world on Google Street View. One day as he's "traveling" the streets of Manhattan, his sharp eye focuses on a scene that looks like a murder being committed. (In case you're wondering, I now have this book on order.)

Instead of Google Street View, Barclay called the program his character used "Whirl360," and if you type whirl360.com in your browser window, you'll be directed to his website. One day the author got a call from his son, who asked, "Did you know that Stephen King mentions Whirl360 in Dr. Sleep?" Barclay didn't know, and he loved the mention from a writer he's long admired. Barclay happened to meet King a short time afterwards. King looked at him, smiled, and asked, "Did you catch the reference?" "I certainly did!" Looking out at us, Barclay said, "I was insufferable for days!"

"I'm very grateful for that," Barclay said, and Barbara Peters nodded in agreement, saying, "It's always nice when another author appreciates your work."

"I'm the ultimate pessimist," Barclay told us. "No Time for Goodbye was the biggest book of 2008 in the UK, and NAL told me that it was a Richard and Judy pick. I don't know if you're familiar with Richard and Judy, but they're the UK equivalent of Oprah and her book picks here in the US. All I could say was 'My book will be the first Richard and Judy book to tank!'"

His publishers had been wanting a sequel for a long time; however, he resisted. But one thing Barclay knew was that what happens to the couple in No Time for Goodbye wouldn't just end. There would be shock waves-- trauma that would take years to overcome-- and he became interested in finding out what would be happening to them seven years later. He envisioned Cynthia becoming a super over-protective mother to Grace, and Grace rebelling. A boy talks Grace into entering an empty house to get the keys so he can take her for a ride in a Porsche. The problem is... the house isn't empty, and something very bad happens while they're in there. So begins No Safe House.

When asked if there would be another sequel, Barclay said, "I can't imagine going back to the Archers a third time, but let's see what happens in the next seven years."

After his four novels featuring Zack Walker, all Barclay's books have been standalones until No Safe House, but he did tell us that several characters from previous books do appear in the trilogy he's working on now.

A fan asked Barclay how he goes about writing a book. "I come up with the hook first, and then I do a very rough outline with the characters and what happens. Then I just start writing. I try to write 2,000 words a day, and I can have a first draft done in two to three months. I spent thirty years in the newspaper business, so I'm used to writing being a job.

"No Time for Goodbye wrote itself. I had to change very little. On the other hand The Accident and A Tap on the Window needed major, major revisions.

"Take The Accident for example. My New York editor loved it, thought it was fantastic. The next day I got a call from my UK editor who said, 'I think you're going to have to start over.' Once he explained himself, I could see that he was right. Editors have helped me make my books better. You just have to get your ego out of the way."

Another fan said, "I've read your Zack Walker books, and I loved them. My question is-- Is Zack Walker you?"

Barclay laughed and replied, "I would love to think that Zack Walker is me-- unchecked. The idea for Bad Move was born at the grocery store when I watched my wife leave her open purse in the shopping cart and then go wandering down the aisle. I thought, why don't I put my wallet in there, too, so the thief can have everything? I wanted to steal her purse to teach her a lesson-- but I wanted to live more. So I had Zack take his wife's purse out of the cart and go out and put it in the trunk of their car. When his wife comes out and he discovers that she'd taken his advice and was wearing a fanny pack, Zack's left sitting there wondering whose purse is in the trunk of the car."

Barclay had us all laughing at this-- and I was sitting there thinking that my copy of Bad Move was going to come off the shelf and be read. Review to follow!

All too soon it was time to raffle off the goodies. I was one of the lucky ones, winning a copy of Chris Grabenstein's Free Fall. But I think I'm not the only one who could've sat there and listened to Linwood Barclay talk all evening. What fun!