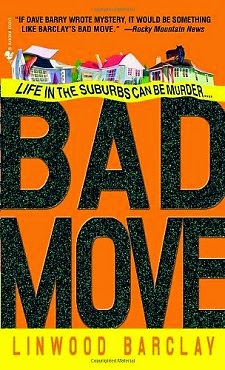 First Line: For years, I envied my friend Jeff Conklin, who, at the age of eleven, found a dead guy.

Zack Walker is a worrier. He's also a bit of a control freak and lectures his family about being safety conscious. Just ask his wife Sarah and his two kids Paul and Angie about the lessons he's tried to teach them about leaving keys dangling from the lock in the front door or dumping their backpacks at the top of the stairs. Zack's even moved his family out to the suburbs because everyone knows the burbs are safer.

Being a science fiction writer, Zack likes to take walks along the nearby creek whenever he's suffering from a bit of writer's block, but the day he discovers a dead body in the creek marks the day his whole world starts turning upside down. He knows the victim-- and he even knows who might have wanted the man dead. With a killer roaming loose, Zack's imagination zooms off at warp nine, and when another local person is murdered, his paranoia implicates him in the crime. The only thing he can think to do in order to protect his family is to track down the killer himself. Heaven help them all.

How good is Bad Move? I took it out to the pool and didn't stop reading-- and laughing-- until I'd finished it. Zack Walker may be a self-professed jerk, but he's an endearing one. All he wants to do is keep his family safe. He thinks the exact same things I think-- when I see a woman walk off leaving her open purse in her shopping cart at the grocery store for example-- but he has the bravery (or perhaps stupidity) to follow through on those thoughts. Naturally every well-intentioned thing he does gets him in so much hot water he may as well rent space in the local hospital's burn unit.

Every character in the cast is a gem-- from his long-suffering (and loving) wife and kids to Housecoat Woman who constantly hoses down her driveway. Part of the charm of this book is watching Zack learn that the location of his new home is every bit as strange as the city-- even if you can't get good Chinese takeout in the burbs.

Sometimes a book is ruined when you read it and know what's going to happen every time. Although I did know what was going to happen in many instances, what kept me thoroughly engaged was seeing how Zack would react to each situation. Second guessing him wasn't always a sure thing.

If you're in the mood for something light and hilarious, by all means get your hands on a copy of Bad Move. I've already ordered Bad Guys, the second book in this series because I've fallen head over heels for Zack the lovable jerk.