Before She Dies by Steven F. Havill 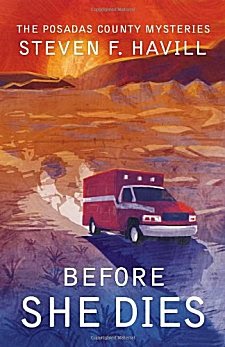 First Line: When Salvador "Sonny" Trujillo Jr. stuck my own gun in my face and pulled the trigger, it put the cap on an otherwise rotten evening.

It's a nighttime patrol that turns into everyone's worst nightmare. Newspaper reporter Linda Real barely survives a shotgun blast that ruins her face while the deputy she was riding with is killed. Deputy Paul Encinos's body is left lying on a Posadas County highway with Linda inside the patrol car. Undersheriff Bill Gastner and Detective Estelle Reyes-Guzman immediately begin working on the case.

The evidence is scanty and puzzling, but Gastner soon implicates hellraiser Tammy Woodruff, the daughter of the local Republican party county chairman. She manages to get out of town before he can question her; however, it seems she went a little too fast because she's found crushed to death after her truck goes off the road. Tammy's death turns into yet another puzzle because she had so much alcohol in her system that there's no way she could've driven her truck out of her driveway, let alone all the way out of town. Gastner and his detective certainly have their work cut out for them.

These Posadas County mysteries are little gems. All about family and friends and support and compassion, when something bad happens to one of them, everyone is galvanized to do something to help. The elements in this series that keep me coming back for more are the picture perfect setting of a small town in the Southwest with its entwined heritage of the Hispanic, Native American and Anglo residents; truly intriguing plots that usually keep me stumped; and a cast of characters with whom you feel right at home. Insomniac Bill Gastner is a tough old bird, filled with compassion and self-deprecating wit, he's capable of lulling suspects into a false sense of security before swooping in with the handcuffs. Or perhaps he'll send in someone else with the cuffs because this older man is all too aware of his physical and emotional limitations.

Before She Dies has yet another of those "stump me" plots that I've grown to love (and expect), and watching this cast of characters grow together warms my heart and makes me smile. Are you one of those people who loves the Western element in Craig Johnson's Sheriff Walt Longmire mysteries? Something tells me you'd enjoy a trip down New Mexico way. Walt and Bill are two lawmen who'd get along together just fine.