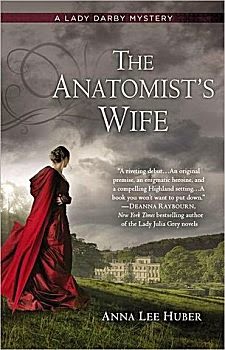 First Line: The scream froze me in my tracks, but the shout that followed propelled me out of my indecision and around the hedge line of the maze.

Following the death of her husband and the ensuing scandal, Lady Darby has taken refuge at her brother-in-law's estate in northwestern Scotland. Kiera appreciates being able to live quietly and focus on her painting, so she's anything but happy when her sister and brother-in-law decide to have a house party for the cream of society. With her sister needing her help at such a busy time, Kiera must join in with people who are convinced that she is just as unnatural as her husband, an anatomist who forced her to illustrate his work at the dissection table.

When a house guest is murdered, her brother-in-law allows no one to leave until the police from Inverness arrive to investigate. In the mean time, another house guest, inquiry agent Sebastian Gage, will begin speaking with the other guests and conducting his own investigation. To Kiera's horror, her brother-in-law asks her to help the insufferable Gage in examining the body because of her knowledge of human anatomy. The two learn to work together, as fingers point at the unnatural Lady Darby and wagging tongues name her as the killer. As Kiera begins receiving threatening notes telling her to stop investigating, she knows that she and Gage must work faster. She must protect her family and prove her innocence before she becomes the next victim.

Anna Lee Huber has given us an excellent blend of mystery and historical detail wrapped up in a country house party. There's even a touch of romance as the story unfolds. The mystery is a complex one due to the background of the victim and the victim's interactions with everyone else at the country house. It takes time to sort through everything, and while I was sorting, I was enjoying Huber's look at high society in the year 1830. Having Kiera be so utterly reviled by everyone gives us a chance to see how the rich and shameless behave around her, and their behavior tells a great deal about them as people and as suspects.

Lady Darby's married life has given her some of the skills needed to be a good investigator. Already a talented artist, her husband nevertheless honed her skill by forcing her to notice minute details while he dissected and she drew. She also learned much in the way of medical matters, and by the same token she learned how to persevere  through extremely unpleasant tasks.

Now that she and Gage have learned to value each other's investigative skills, it's going to be interesting to see them work together again.  The rogue and the recluse. The private inquiry agent and the artist. The sought-after and the universally reviled. I'm definitely looking forward to the second book in this series.