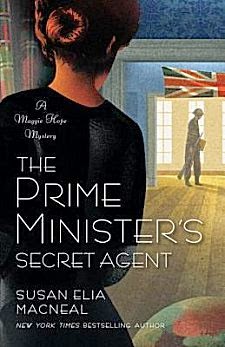 First Line: There will always be an England!

In The Prime Minister's Secret Agent, Maggie Hope finds herself teaching at her old spy training camp on the west coast of Scotland. This should be a time of rest and healing, but Maggie seems to be a bit of a trouble magnet. When three ballerinas-- including one of Maggie's dearest friends-- become sick with a very strange illness in Glasgow, she partners with MI-5 to uncover the truth. What she finds could put countless British lives at stake.

I really enjoy following Maggie Hope to see what war intrigues she gets herself into. This time we see a very different woman who's been changed by her experiences in Europe in the previous book. She's a leaner, meaner Maggie, and when she begins work on saving her friend, she's in no mood to put up with government subterfuge. MacNeal has done her research, and she doesn't try to paint historical figures we've come to think of as heroes as saints. Men-- like Churchill for example-- had to make impossible choices because they knew they were in a life-or-death struggle with Hitler. Sometimes, the choices that were made were questionable. The author does readers a great service by giving them a more complete picture.

One element that made this book even more suspenseful was the constant weaving in of facts surrounding the impending attack on Pearl Harbor. Everything from what the Japanese were doing and when they were doing it to what people like Roosevelt and Churchill knew-- and when they knew it. This is some fascinating reading that gives a real sense of foreboding to the narrative.

This book can be read as a standalone, but for the evolution of Maggie's character, I would suggest that you begin at the beginning with Mr. Churchill's Secretary-- especially if you've read and enjoyed authors like Jacqueline Winspear or Charles Todd. And don't be surprised if you find Maggie Hope just as addictive as I do.