The Miniaturist by Jessie Burton 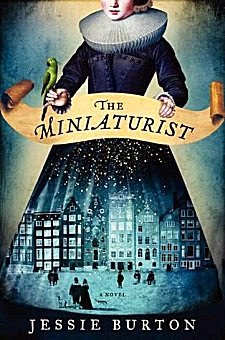 First Line: The funeral is supposed to be a quiet affair, for the deceased had no friends.

In the fall of 1686 Nella, a young girl from an impoverished yet well-born family, is sent to Amsterdam to live with her wealthy and much older husband, Johannes. It is a marriage arranged by Nella's mother and Johannes' sister. As the days pass, Nella is increasingly frustrated in her attempts to find her place in the household. Her sister-in-law seems to despise her and her husband wants absolutely nothing to do with her.

The only real kindness Johannes has shown her is to have a custom cabinet-sized model of her new home built and to give her some money with which to furnish it. All she has to look forward to are packages from a mysterious miniaturist, whose tiny creations have an uncanny resemblance to people in the house.  Soon the reaction to these deliveries changes from delight to dread because the miniaturist appears to know much more about Nella and her new family than should be possible. Can the miniaturist predict their future?

I was looking forward to reading this book with a great deal of anticipation. I was ready to be transported to seventeenth-century Amsterdam and immersed in the lives of a family filled with secrets. I was, but when all is said and done, I couldn't quite suspend my disbelief enough to thoroughly enjoy the book.

As should be, the main character, Nella, held most of my attention, and her clumsy attempts to fit in this very strange household and to entice her husband into her bed elicited my sympathy. Each character-- from Nella to Marin the hateful sister-in-law to the distant husband Johannes to the servants, Otto and Cornelia-- have secrets and unexpected depths that add a great deal to the story, although I found none of them particularly likeable.

However, two things kept throwing me out of the story: historical accuracy and the character of the miniaturist. Let me stress one thing before I go any further. I am not a stickler for historical accuracy in fiction. If the story has its grip on me, I can ignore a few things here and there because I know I'm reading fiction. In The Miniaturist, the author has obviously done a lot of research on physical setting and objects. I can see the streets, I can picture Nella's house, and I can see the cabinet filled with tiny works of art. Unfortunately, the time frame of the story always seems a little "off"-- and not just because the characters slip into a twenty-first century way of speaking and writing from time to time.

In the book, Amsterdam is in the clutches of a strict and repressive church. Church leaders ban the baking of gingerbread in the form of humans because it smacks of Catholic idolatry. At the same time, women supposedly have a great deal of freedom in the city; Nella walks across town several times without a chaperone. Religious repression and female emancipation of any sort never go hand in hand. There were just too many times when I felt off balance-- as though the early and late seventeenth century time periods were fighting it out for supremacy.  I felt so off-kilter in fact, that I did a bit of checking to refresh my memory. For example, those gingerbread men were banned in 1607, not 1686. However, there is room for literary license because not everyone will have read enough about the time period to find these things jarring enough to turn to Google.

At the end of the day, the character of the miniaturist was the one thing that didn't work for me at all. Very little background is given, and the character vanishes midway through the book. Is the person magical? Crazy? Some sort of savior? I have a feeling that I would have enjoyed the book-- and the author's lyrical and descriptive writing style-- much more without this particular character.