The Care and Management of Lies by Jacqueline Winspear 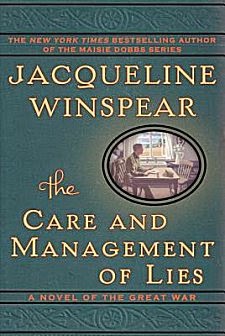 First Line: The country was in the early weeks of a summer that would become memorable for its warmth, and despite worries farther afield, there was a sense of being cocooned in Englishness.

By July 1914, Kezia Marchant is looking forward to her marriage to farmer Tom Brissenden. The only thing she cannot understand is why her marriage to her best friend Thea's brother seems to be putting additional strain on their friendship. Thea's gift to Kezia, a book on household management, is a sly dig at her decision to settle down to life as a farmer's wife instead of living in London to be a teacher and to fight for women's suffrage as Thea has done. Then World War I takes over all their lives. Tom enlists in the army, Thea becomes an ambulance driver, and Kezia is left behind to take over the running of the farm. Each will be forced to find ways to cope with the world as it shatters around them.

When I first learned that this was not the latest book in Winspear's Maisie Dobbs series, I did feel a moment of disappointment. I've grown to love Maisie, and I look forward to seeing how her life changes; however, this book-- written to coincide with the centenary of World War I-- is about one of my favorite time periods, and I wasn't about to ignore it. I'm glad I didn't.

This elegiac and slow-moving narrative was inspired by a book Winspear found in a London book stall. The battered book on household management was inscribed to a bride on the occasion of her wedding in July 1914, and Winspear couldn't help but wonder about the changes that young woman's life underwent in the succeeding years. In The Care and Management of Lies, we see the hardworking, honorable and compassionate Tom enlisting after several of his farm workers do. (The war was going to be over by Christmas after all.) Kezia, a vicar's daughter totally unused to the workings of a prosperous farm, is left to carry on with the help of a couple of the old and disabled and a variety of workers brought in to make do. Thea reluctantly finds herself learning how to repair ambulances and driving them back and forth to the front lines. Each, in his or her own way, depends on letters and care packages from the others to help them cope with the seemingly overwhelming difficulties and horrors of what they must do.

Kezia, the only one of the three left behind, finds herself the primary caregiver to the other two. Her letters to Tom become eagerly awaited items by Tom's entire outfit. In them, she describes in detail the meals she has lovingly prepared for her husband, and while Tom reads them aloud to his mates, each one is comforted by the memories these words from home evoke. Kezia sends care packages containing food and small items that Tom and Thea need, and her words bring love and respite. None of the three tell the truth of what they are facing. All three want to shield the others with loving lies and omissions.

As I said at the beginning, this book is slow moving, and it's not about Maisie, but there's gold to be found in the pages. If you love food, you're going to love Kezia's descriptions of the meals she prepares-- they can make your mouth water. There's quite a bit about those meals, but I didn't find it repetitive.  Kezia uses those descriptions to care for those she loves in the only way she can, and as you read about her life on the farm, it's easy to see that, in the writing of them, she's taking herself away from reality for a while, too.

Winspear brings the reality of war in the trenches and living with men from all levels of society to life in all its smells, pettiness, filth, horror, and heroism. The relationships between Tom and the other soldiers show so much of the human condition. By book's end I realized that I had just read about the trial by fire of a generation who would go on to "keep calm and carry on" twenty years down the road. This is a lyrical and sobering book indeed.