The Hollow Core by Lesley Horton 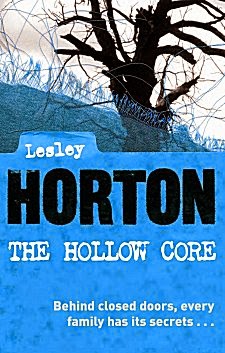 First Line: When he knocked, Kathie Lake was cleaning, one eye on Coronation Street, the other on the ornaments she was dusting.

Every family has its secrets, and Detective Inspector John Handford and his team have more secrets than they know what to do with when a woman is gunned down after a family celebration. Diane Ingleby was a highly valued volunteer who worked with victims of abuse. No one has a bad word to say about her, but her husband is another story. Maurice Ingleby is a self-made real estate developer who's not shied away from making enemies. He's also a womanizer and suspected bankroller of the British National Party. The shooter could easily have been aiming for Maurice and missed.

But when the police really begin to dig into the case, they find that the Ingleby daughter has secrets of her own-- and Diane was worried enough about one of her abuse victims that she broke the rules and kept notes about their sessions. Not only are too many secrets flooding in from different aspects of the investigation, but the team's personal lives begin to intrude. The newest member, Detective Constable Parvez Miah, is the son of the most influential person in the local Muslim community, and when Miah's wife is found badly beaten, it looks as though the Inglebys aren't the only ones with secrets to hide.

I've enjoyed this edgy series for Horton's unflinching look at the problems of race, religion, and national identity in Bradford, Yorkshire, and The Hollow Core is the strongest book yet. In her life before becoming a writer, Lesley Horton was a schoolteacher, she ran an educational unit for pregnant school girls, and she was a volunteer for Victim Support. As the book deals with issues like domestic abuse, teenage pregnancy, and arranged marriages, each situation has such a feeling of truth and anger and sadness and exasperation that I had no trouble at all in understanding that Horton has personally dealt with each one.

In all the British police procedural series that I read, I think it's rather surprising that Horton's is really the only one that deals head-on with the thorny issues of race and religion. (And it would have to if a true portrait of Bradford was wanted.) She does it in a very realistic way, beginning with her characters-- an excellent ensemble cast. Handford is a good Anglo-Saxon police officer who's up for a greatly desired promotion. Being labeled a racist seems to be firmly in his past. (And it should be.) His Muslim sergeant Khalid Ali had a rather rough transition to the team, but now he's liked and respected by everyone. He's come into his own. Adding a highly connected young constable to the team is a bit of genius, since we're then allowed right into the home of a very important, very devout Muslim family to see how different it is to our own.

The plot of The Hollow Core is compelling and kept me engrossed from the beginning. The way Handford and his team work together to tease out each clue, each bit of information, and try to put it all into some sort of comprehensible order fascinated me. When the author began to weave each policeman's own private worries, strand by strand, into the story, the element of tension rose. How is that one going to deal with the stress? Is this one going to see the evidence that's right in front of his face, or is he going to worry about what is happening at home? This is a story that's both personal and wide-ranging, and I'll move on to the last book with a mixture of anticipation and sadness at the thought of an excellent series ending much too soon.