Murder on the Eiffel Tower by Claude Izner 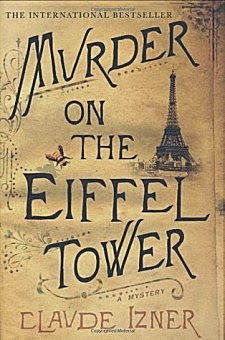 First Line: Storm clouds raced over the barren plain between the fortifications and the goods station at Les Batignolles, where the scrubby grass smelled unpleasantly of sewers.

It's Paris during the 1889 World Exhibition, and the thing to do is go up the brand-new Eiffel Tower to sign the book proving you've been there. When a woman dies on one of the viewing platforms, her death is attributed to a bee sting, but when other "bee sting" deaths begin cropping up in close proximity to the stunning landmark, bookseller Victor Legris thinks there may be another, more sinister, cause of death. His investigation takes him all over Paris, and his list of suspects include his surrogate father and a beautiful Russian artist. One thing is for certain-- he'd better hurry up because he's drawn the attention of the killer, and time is running out.

This book is a splendid evocation of Paris during the Belle Époque, and Legris' frequent walks in various neighborhoods made me very happy indeed. The two women booksellers who write as Claude Izner bring their setting to life.

The mystery is also a good one. By the time I pieced all the clues together, it was almost time for the reveal. The list of suspects is a long one and represents almost all the various social strata in the city, which gives the authors more opportunity to depict their beloved Paris.

The one aspect of the book that I felt was lacking was the cast of characters. The only character in the entire book whom I felt had a real spark of life to him was Joseph, the assistant in Victor's bookshop. (While I'm on the subject of that bookshop, librarians and booksellers reading Murder on the Eiffel Tower will see that customers really haven't changed much from one century to another.) The main character, Victor Legris, is what I've always thought of as a boulevardier-- a man-about-town. He dresses well, he dines well, he has a mistress. Victor has many things and does many things (even deigning to work in his shop from time to time), but he still felt a bit two-dimensional, a bit reserved, as did everyone else.

As much as I loved mentally walking the streets of Paris in the late nineteenth century while solving an enjoyable mystery, it's the stiffness of the characters that will make me hesitate to continue with this series.