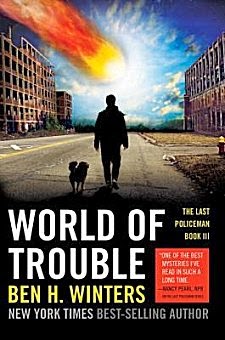 First Line: "Are you here about the dust?"

There's one week left until the huge asteroid hits and ends life as we know it on planet Earth. Hank Palace has only one thing on his to-do list: find his sister Nico. The last he heard, she was hooked up with a group of people who had some sort of plan to save the world, so he leaves the well-stocked safe house in the woods and travels through a bleak landscape in order to find her. At any other time Hank's task would be a simple one, but with the clock ticking, one obstacle after another is put in his path.

Ben H. Winters' Last Policeman trilogy began with a built-in expiration date, and World of Trouble ends it in style. There may be a week before the end of the world, but the landscape Hank Palace travels through looks as though it's already happened. Technology died a long time ago. Cities are blackened and abandoned ruins. Bicycles are the most advanced mode of transportation. People have turned into hoarders and scroungers. Very few have the courage or the desire to show kindness to strangers, so Hank and his dog Houdini have no one to rely on but themselves.

While the first two books in the trilogy were pre-apocalyptic mysteries (The Last Policeman and Countdown City), this final book begins as a straightforward tale of a brother going to be with his sister at the end of days. But Hank Palace is a young man who has always done his best to do the right thing, so it should be no surprise that he manages to find a puzzle or two that need solving before time runs out.

Anyone who wanted a more explosive ending to the trilogy may not like this rather quiet, somber book. I didn't know what to expect and was content to let the story unfold. I was not disappointed.  Hank Palace is a character that will live on in my memory as will the author's vision of the end of the world. I'm sad that the trilogy has come to an end; however, Winters appears to have followed the advice of P.T. Barnum: Always leave them wanting more. I'm looking forward to what Winters' imagination has in store for us next.