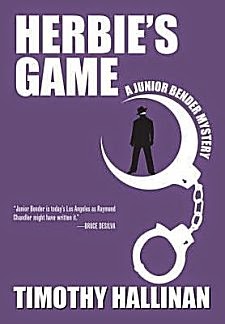 The top executive crook in the San Fernando Valley has been burgled, and it's bad news. It used to be that Wattles could remember every step in the chain of the hit that had been ordered, but lately he's afraid he'll forget something, so he wrote the latest one down. That piece of paper has been stolen, and the people whose names were on it are beginning to pop up all over town... dead. The only person Wattles can turn to is Junior Bender, professional burglar and reluctant private eye for valley crooks.

Problem is, Junior already knows who cracked Wattles' safe: Herbie Mott, his mentor and the man he's always considered to be his second father. This is one investigation in which Junior is going to learn way more than he ever wanted to know.

This fourth book in Hallinan's Junior Bender series is much more somber than the others. The trademark laugh-out-loud humor and wisecracks are still there, but they're restrained by the very personal nature of Junior's investigation. Herbie Mott is the man who taught Junior everything he needed to know about the burglary business, and he also taught Junior many important lessons about life. Junior has always looked up to Herbie, so when he goes to find out why Herbie burgled Wattles' safe and finds him dead, his shock and grief are profound.

As he continues to follow clues, he learns more and more about the man Herbie really was, and Junior can't understand how he could have been so blind. For anyone who's read all the Junior Bender books (like I have), the answer is a simple one, and Junior's ex-wife says it best:

"It's because you're decent... it's something people don't think about. The people who have it usually don't even know it... Because decent people assume everyone else is decent. They don't see it as anything special."


The ex-wife hit the nail right on the head. That's the basic part of Junior's charm: he's a decent person and-- even though he's employed on the wrong side of the law-- he expects everyone else to be decent, too. You know he's going to do the right thing even if it isn't easy or convenient simply because it's the right thing to do.

Timothy Hallinan's Junior Bender books are a treat to read. We get to learn some Hollywood and Los Angeles history, we get to see how crooks run their businesses (and how they often intersect with "legitimate" business), we get to laugh a lot, and we get to experience it all through a man most people would never consider to be good because he's a thief. It's a different perspective that I enjoy to pieces, especially knowing that learning about Junior is enough to make some people grind their teeth and think the world's coming to an end.