Death in the Cotswolds by Rebecca Tope 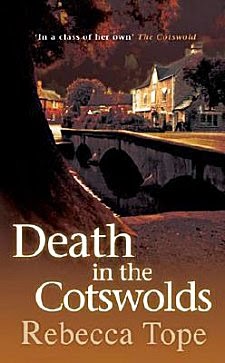 First Line: That October was much as usual-- blowy, damp, mild, the leaves still green on the boughs, the sheep fat-bottomed and clean with their new fleece, complacent from the attentions of the tup.

House sitting in the Cotswolds hasn't turned out exactly as Thea Osborne planned. After becoming entangled in murder investigations during her first two jobs, she's more than happy to spend a quiet week with Detective Inspector Phil Hollis and their dogs to nurture their developing relationship. Even meeting Ariadne, Phil's prickly childhood friend who lives across the street, can't tarnish Thea's happiness.

But the house sitter on vacation must have been born under an unlucky star. Ariadne finds the body of her friend laid out like a sacrificial victim in Notgrove Barrow, and the two women are repeatedly thrown together as they conduct their own investigation. It doesn't take long for them to discover that several people in the beautiful little village have secrets, but which one would kill to keep theirs hidden?

One of the things I enjoy about this series is "visiting" all these lovely little villages in the Cotswolds in England. The villages actually exist; the author has just taken artistic license with the people, the houses and the businesses. Despite the necessary changes, the reader is able to learn about the area, and the setting adds a great deal of flavor to each book. (In Death in the Cotswolds, I learned more about sheep, about spinning and dyeing wool, and about the care and feeding of a pig, among other things.)

Tope tries something a little different in this third book in the series. The story is told from the point of view of Ariadne, not Thea. This is tricky-- and it doesn't always work-- but Ariadne is so eccentric, so prickly, that I found her side of things fascinating. She tells us about herself, from childhood to the present, and she certainly isn't shy about voicing her opinions. In addition, the author's turning Ariadne into the storyteller means that we get to see Thea Osborne from a completely different perspective-- and one that isn't always flattering. As the two women find themselves spending more and more time together, it's interesting to see how Ariadne's opinion of Thea changes. Moreover, all the time these two women are searching for a killer, Ariadne also begins learning some home truths about herself. She's a complex and ultimately sympathetic character that I hope to see in future books.

Speaking of complex, the plot itself certainly fills that bill. Tope plants clues all along the way, and I don't know if I was enjoying Ariadne and her interactions with Thea too much or what because I saw the clues and refused to admit where they were leading. That'll teach me! Hopefully I'll remember this lesson learned when I pick up the next book in the series!