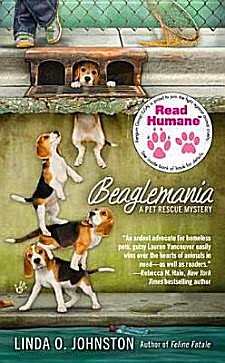 Lauren Vancouver runs a no-kill animal shelter north of Los Angeles called HotRescues. When she is called in to help shut down a puppy mill, she believes that a man with a history of dog abuse is responsible for throwing some of the beagle pups down a storm drain. When that same man is found stabbed to death at HotRescues, guess who's Suspect #1? You got it-- Lauren-- and she knows she's going to have to sniff out the killer before she's the one being thrown in a cage.

Beaglemania is filled with useful information on shelters, puppy mills, and how to care for animals, and I enjoyed all of that very much. If only the rest of the book had been as interesting.

The mystery is fairly predictable, and I knew the identity of the killer in the first scene in which that person made an appearance. (I hate that when it happens.) Even then I would have liked the book if I'd liked the characters, but they seemed lackluster as well. The rest of the cast takes a backseat to Lauren Vancouver, who has an irritating tendency to fly off half-cocked. She's trying to find a killer, so she goes off to question the people on her suspect list by herself. She's lucky she didn't get stabbed and shoved down a storm drain. Then she agrees to an interview and expects the media not to do a slice-dice-and-spin-it-our-way on the tape. It's very difficult for me to like a character who repeatedly forgets to use her little grey cells.

I was expecting something a little bit different in this book because of the first two lines I quoted-- which I found very intriguing; however, those lines came to nothing, and I was left feeling as though Beaglemania was a sad-eyed dog that couldn't wag its tail.