The Weed That Strings the Hangman's Bag by Alan Bradley 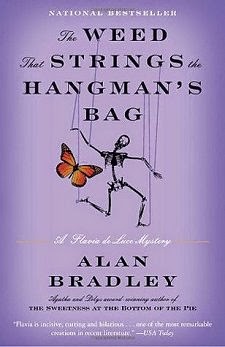 First Line: I was lying dead in the churchyard.

Interrupted from imagining her own funeral, eleven-year-old Flavia de Luce meets the assistant of beloved puppeteer Rupert Porson. While trying to help the stranded pair get their vehicle repaired, one thing leads to another and Porson agrees to a couple of special programs at the church hall in Bishop's Lacey.

Porson comes to a sizzling end during the second show, and Flavia finds new meaning to her life and a spring in her step. Who would want to kill such a popular man-- and why?  It's enough to keep the budding mad chemist away from her concoctions and hard on the heels of a killer. Will Flavia be able to sort through all the secrets she discovers before the killer pulls her strings?

When I read the first book in the series, The Sweetness at the Bottom of the Pie, I was charmed by the story and the humor, but I have to admit that thinking of the eleven-year-old main character sneaking around trying to poison her sisters presented me with a misgiving or two. Now that I've read this second book, those misgivings have disappeared, and it's all due to author Alan Bradley's characterization. The entire de Luce family has grown and developed in this second book, and Flavia's behavior is much better understood. In fact-- since her two sisters remind me a great deal of Cinderella's stepsisters-- I rather hope Flavia is successful with her potions. (And I'll have the pleasure of finding out by reading the other books in this series.)

It is pure pleasure to watch this little girl uncover evidence... clues... secrets... and then try to get the police to act upon her discoveries. She sometimes appears to be by far the most adult person in Bishop's Lacey and the surrounding area. I also love how she applies her reading and her scientific experiments to her investigation.

The wit, the humor, the twists and turns of the plot, and an incredibly bright little girl make these books a joy to read.