The Track of Sand by Andrea Camilleri 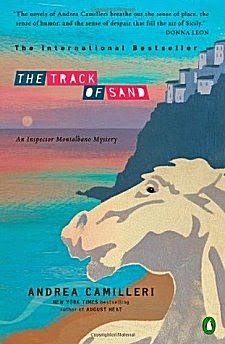 First Line: He opened his eyes and immediately closed them again.

When Sicily's Inspector Salvatore Montalbano wakes from a very unsettling dream, he looks out his window and sees a dead horse on the beach right in front of his house. Going outside, he discovers that the animal has been bludgeoned to death. Montalbano goes inside to call his men to come investigate, but by the time he's dressed and they have arrived, the horse's body has disappeared-- leaving only a trail of sand to mark that it had ever been there.

Soon afterwards, it seems that each time Montalbano leaves his home, someone breaks in and ransacks it. Montalbano has no idea what they're looking for, but he can't help believing that it has something to do with the dead horse. His investigation leads him straight into the worlds of the Mafia and horse racing-- and right into the orbit of a beautiful and intriguing woman.

By the twelfth book in this series, there's really not much new to say. Each slim volume is a perfect example of the translator's art, and each gives the reader a slice of Sicily in all its beauty, its ugliness, its humor, its despair, and-- last but not least-- its glorious food.

Montalbano's methods may be unorthodox, but he's a master of piecing things together and of evading his nitwit superiors so he can get the job done. He's got the perfect team to work with, and if it ever get dull, everyone in the station can rely on Catarella to liven things up. We also get to watch the inspector making a purchase in a local bookstore, a scene which every book (and crime fiction) lover will enjoy reading.

A recurring theme in these Montalbano books is his hatred of aging. In previous books, his whining about his advancing years got on my nerves a bit, but his complaints have mellowed, and I endure them and smile as I would with a friend. In The Track of Sand, Montalbano is dead set against wearing glasses, and Camilleri describes his brush with a mesmerizing woman so beautifully and tenderly that I could actually understand why a man might sometimes think of being unfaithful.

Camilleri is a master of the concise mystery that packs a punch. Like all the others in this series, The Track of Sand is filled with humor, delicious food, wonderful characters, and an interesting investigation. (Although I knew where Montalbano should be looking before he did, I still enjoyed watching his progress.) Each book is a delectable slice of Sicily, and I savor them all.