That Summer by Lauren Willig 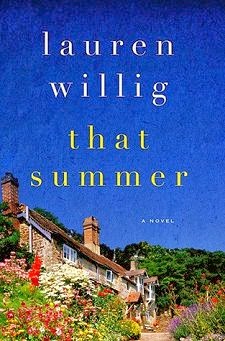 When Julia Conley first learns that she's inherited a house from an unknown great aunt in London, she thinks it's a joke. After learning that it's not-- and being between jobs-- she decides to leave New York City and head to Herne Hill outside London to sort through the house's contents and get it ready for sale. Julia hasn't been back to England since the car crash that killed her mother when Julia was six, but as she begins clearing rooms in the old house with the help of her cousin Natalie and antiques dealer Nicholas, fragments of memory begin flooding back.

A window into the shadowy history of Herne Hill begins to open when Julia finds a glorious Pre-Raphaelite painting hidden at the back of an old wardrobe. From 2009, the painting takes Julia back to 1849 and the loveless marriage of Imogen Grantham. After ten years of marriage to a much older man, the only bright spot in Imogen's life is her step-daughter-- until three young artists come to see her husband's collection of medieval artifacts. When Arthur Grantham hires one of the three to paint his wife's portrait, destiny takes over.

I've been a fan of Gothic novels since I was barely into my teens. For me, it wasn't the romance of the story, but the (often) spooky mansion and the treasures it almost always had tucked away. I must've been in the perfect mood for a return to the Gothic because I fell into That Summer and sank with scarcely a trace.

The old house, Herne Hill, comes up trumps in Willig's story. It's chock-a-block with all sorts of treasures, and when Julia attempts to discover what that big old piece of furniture is hiding, her channeling Nancy Drew and muttering about "the mystery of the old wardrobe" made me laugh. The alternating timelines are also well done. Usually one timeline will be much stronger than the other, but not here. There's too much that needs explanation in Julia's past for it to take a backseat, although I will admit that the 1849 story concerning the always fascinating Pre-Raphaelites does have a tiny bit of an edge.

There are a few stock characters in That Summer; it's hard not to have them in a Gothic novel, but they are limited to a couple of minor characters. The pairs of lovers (or wannabes)-- Imogen and Gavin, Julia and Nicholas-- come close to being perfect. It's fun to read and attempt to deduce the motivations for their behavior. The romance aspect is also very well done: there's enough for romance readers to sigh happily and wish for a little more while not antagonizing those who prefer little-to-no throbbing hearts in their fiction.

Humor, romance, a good brush with creepy characters and situations now and again, secret hiding places, art treasures, and an old house with a story to tell.... If you're in the mood, then I know the book to recommend: Lauren Willig's That Summer.