Hell With the Lid Blown Off by Donis Casey 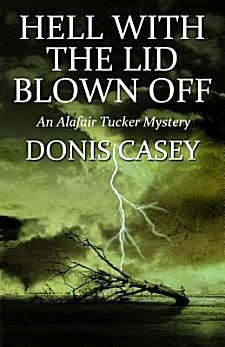 First Line: The summer that Jubal Beldon was killed was the same summer that we had the big storm in Boynton, Oklahoma.

A tornado leaves a path of destruction around Boynton, Oklahoma, in the summer of 1916. Many people are affected, including Alafair Tucker's family and neighbors. When the body of Jubal Beldon is found in the debris, it's thought that he was killed by the twister, and even when it's determined that he was murdered, people can't really work up enough energy to mourn him.

Jubal Beldon was a violent, nasty man who had a talent for lurking around corners and in the shadows to learn everyone's ugly secrets. When he didn't learn anything about a person, he thought nothing of making up something and spreading vicious rumors. With the death of such a man, the suspect list is going to be a very long one indeed, and it's up to Sheriff Scott Tucker and his young deputy Trenton Calder to find the killer.

Hell With the Lid Blown Off is a bit of a departure for author Donis Casey, and it's one of her very best books in this excellent historical mystery series. For once, farm wife and mother of ten Alafair Tucker does not conduct her own investigation into the death of Jubal Beldon; she's much too busy taking care of injured family members and cleaning up after the tornado's destruction. Instead, the balance of the story rests on the shoulders of her musically inclined daughter Ruth and the young deputy Trenton Calder.

The story is told by different characters in alternating chapters, and Trenton Calder's sections are told in the first person. As a result readers see everything through his eyes as he meets all the others before and during the investigation. This multiple point of view approach with one of the characters speaking in first person doesn't always work, but it certainly does here. Trenton is a winning young man, and it was a pleasure to watch him take a shine to a certain young woman in Boynton and to see how seriously he took his work. His scenes bring an immediacy and freshness to the story.

Yes, Alafair takes a bit of a backseat in this mystery, but her presence is always felt. With this seventh book in the series, I feel as though I'm a neighbor to the Tuckers who's been privileged to be a family friend and watch Shaw and Alafair's children grow. One of the very best part of this series is learning how a farm wife back in that day and age managed to raise a huge family and keep them all clean, fed, and happy. It's a testament to Casey's talent as a writer that she can handle such a large cast of family members, give each of them a distinct personality, and yet not confuse the daylights out of readers.

The lead-in to the tornado was nerve-wracking, as were the scenes of the tornado itself. With the alternating chapters, I kept getting the feeling that we were saying good-bye to some of these characters, and yes-- I was worried. I lived in tornado country, and the scenes depicting the storm brought back some bad memories. Hell With the Lid Blown Off is a fine blend of characterization, mystery, and setting that involves a reader's mind and emotions. Now that I've caught my breath, I can't wait for my next visit to the Tucker farm.