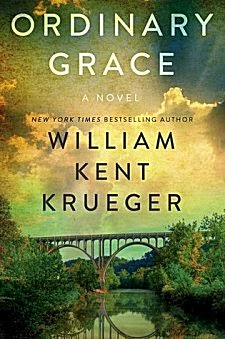 First Line: All the dying that summer began with the death of a child, a boy with golden hair and thick glasses, killed on the railroad tracks outside New Bremen, Minnesota, sliced into pieces by a thousand tons of steel speeding across the prairie toward South Dakota.

Forty years on, Frank Drum looks back at the pivotal summer when he was thirteen in small town New Bremen, Minnesota. That summer's tragedies began with the death of a young boy Frank knew and as more unfolded, Frank's entire family is caught in their undertow. From Frank to his Methodist minister father to his passionate, willful mother to his musically gifted older sister to his stuttering kid brother, each family member is changed as the heat- and sun-filled days pass.

Ordinary Grace is a lyrical evocation of a time (1961) and a place (small town America). I was a child in 1961, and when I entered the world William Kent Krueger created, everything was utterly familiar to me; there were no false notes. This book is also a marvelous coming-of-age tale reminiscent of classics like To Kill a Mockingbird or Stand by Me. Frank Drum begins as a typical teenage boy who might be in trouble a bit more than he should, but as the summer progresses, he finds himself trying to make sense of the adult world of lies and secrets that he's been thrust right in the middle of.

Ordinary Grace is also a strong mystery. Frank and anyone who picks up this book wants to know who is responsible for that summer's deaths. As Frank learns more and more from his talent for being a fly on the wall, he suddenly wants to stop sneaking around to learn things and to be treated as an adult instead. As this summer of tragedy and wisdom and grace flows from one day to the next, Frank sees the members of his family in a new and more understanding light, and he is forever changed-- as are readers who have been caught in the spell of this beautiful and powerful book. Highly recommended!