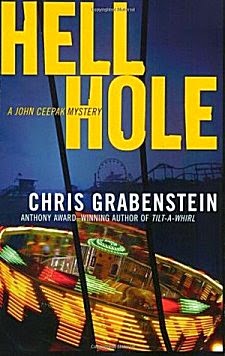 First Line: It's almost 1:00 AM on a Saturday and the partiers inside the rental house at the corner of Kipper Street and Beach Lane are chanting like drunken sailors chasing a runaway keg of beer.

Danny Boyle is working the night shift with a part-time summer cop when they get a complaint about noise. When they arrive at the rental house, they can hear why neighbors can't sleep. A houseful of Army Rangers are celebrating, and they want everyone to know it. Their celebration is cut short when it is discovered that the one person who was late has been found dead in a bathroom stall at a highway rest area.

Out of Sea Haven, New Jersey's jurisdiction, Danny has to watch incompetents trample over a crime scene and totally misread the evidence right in front of their faces. As far as they are concerned, the guy committed suicide, but fortunately Danny filed away things that didn't seem right to him, and he managed to take a couple of photos with his cell phone. Now it's time to get together with the man he looks up to: John Ceepak. What the two piece together points to a dead man who may have been privy to information on a conspiracy leading all the way back to the Middle East. And to prove their suspicions and to do what's right, Ceepak and Boyle are going to find themselves on the wrong side of some very nasty people.

My love affair with this series and with the characters of Ceepak and Boyle continues. In this fourth book, Danny is beginning to show how much he's learned from the veteran Ceepak, whose stepson sometimes thinks of him as a combination overgrown Boy Scout/ Dudley Do-Right. Danny is beginning to shed his lackadaisical beach dude - good time boy persona. Oh, he still wants to have a good time, but he's finding that he has a knack for being a good cop, and he wants to be an even better one. Even Ceepak has mellowed a bit with the change in his home life, and readers get to see why he's been estranged from his father for so long.

This series has a lot of heart, and a lot of humor. It has two characters who can easily charm their way into readers' hearts, and these two do not remain static; they've been gradually changing from book to book. Heart, humor, characters-- and action sequences that grab you by the throat and don't let you go until they're good and ready. Add all those to a first-rate "locked stall" mystery filled with twists and turns and characters that are difficult to decide if they're in the Good Guy or Bad Guy categories.

My only complaint is that these books read much too quickly. Once I start, I don't want to stop, and when I come to the end, I immediately want to grab the next one and sink right down into the pages. You can start this series anywhere, but if you love marvelous characters like I do, you're going to want to start at the very beginning (Tilt-a-Whirl) so you can watch Danny Boyle grow up and John Ceepak mellow. Whichever path you choose to take, all I really recommend is that you read one. You'll be glad you did.