The Last Refuge by Craig Robertson 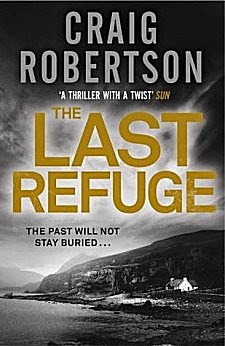 First Line: There comes a moment in the wrestle for life when the distinction between opposing sides is blurred to the point of blindness.

John Callum has turned his back on his former life and has gone to what he considers the back of beyond-- the Faroe Islands-- for a fresh start. The islands, an autonomous country within the kingdom of Denmark, are northwest of Scotland and halfway between Iceland and Norway. It is a good place to begin anew. Even though Callum finds work and makes a few friends, he's finding it hard to adjust to the fact that the sun never sets at this time of year. What little sleep he does manage to get is ripped to shreds by horrible nightmares.

Then the unthinkable happens. Someone is murdered-- a crime that's almost unheard of in this peaceful, remote place-- and when the Danish police show up to investigate, it doesn't take long for them to have their prime suspect firmly in their sights: John Callum. Even Callum isn't certain that he's not the killer, but with the Danish police not looking at anyone else, he knows he's got to be responsible for his own fate.

The Last Refuge grabbed me from the first page and wouldn't let go until the very end. The setting is absolute perfection. Few people have even heard of the Faroe Islands. (I am one of the lucky ones; after seeing a stunningly beautiful photograph of towering green cliffs and cascading waterfalls, I learned that it was taken on one of the eighteen islands that make up the archipelago.) Craig Robertson puts readers right in the middle of this incredible landscape and shares not only its beauty, wildlife and remoteness, but the towns, the people, and the customs and language as well. My reaction to the setting was visceral and immediate.

But setting alone does not make a book. To it, Robertson adds a strong cast of characters. John Callum is a man filled with secrets, and although readers quickly learn how horrifying his nightmares are and how quick-tempered he can be, they somehow know that he is a man who can be trusted, a man who can be a friend. Robertson makes them want to shake Callum until he tells them why he ran away from Scotland-- and it's a secret that takes a long time to unveil.

Karis, the woman with whom Callum falls in love, is alluring and mercurial. She has secrets, too. Many of the secondary characters do, and Callum even has a difficult time figuring out the local inspector, Broddi Tunheim, who refuses to go quietly into that good night once the Danish police have made their entrance. These three characters-- and others-- shine brightly in this tightly woven plot that has so many twists and turns.

Yes indeed-- The Last Refuge is a perfect blend of story, character and setting, each of which illuminate and strengthen the others. Sometimes bleak and desolate, it's an enthralling look deep into a man's soul and deep into a fascinating place. I highly recommend it.