Death From the Woods by Brigitte Aubert 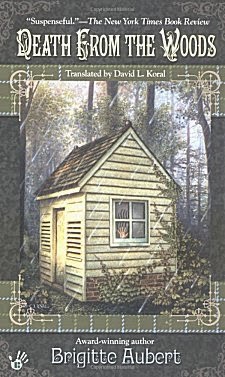 Elise Andrioli is a blind, mute quadriplegic with an uncertain future. Fortunately she has a father who wants her to have the best of care, so she lives in a house outside Paris with her caregiver, Yvette.

One day Yvette takes Elise to the supermarket, and while Elise is waiting outside, a little girl comes up to her and whispers that she knows the identity of the person who's murdering little boys in the area. Virginie has tried to tell other people what she knows, but they think the little girl is mentally disturbed. For some reason, Virginie trusts Elise-- probably for the simple reason that most people think the woman in the wheelchair is a vegetable and can't understand what's going on around her. But Elise does understand, and what she's just been told puts her in just as much danger as little Virginie.

Death From the Woods was named France's Best Thriller of 1997, and the reason for that, without doubt, is the character of Elise Andrioli. Most people upon hearing that the main character is a blind, mute quadriplegic will probably avoid the book, thinking that it's too depressing. It is not because the story is told by Elise, and we get to see how smart and brave and funny she is. Her sense of humor is what is helping her to survive being unable to communicate with anyone. When Virginie shares her bombshell with Elise, the knowledge fires her up. Elise wants to learn more, and she wants to be able to share her knowledge with the police. When she does manage to regain the use of one index finger and uses it to answer yes or no questions, the news spreads through their little circle of friends and acquaintances. Soon the murderer knows as well, and Elise's life is threatened in more than one bone-chilling scene.

Through Elise, our own senses are limited to what she can hear and what she can feel, and this certainly ratchets up the tension, but the rest of the characters are mostly stereotypes, and I found it entirely too easy to pinpoint the killer's identity. Moreover, the ending was anticlimactic and the type that I dislike the most: one of the characters tells us everything that happened. Quelle déception!

I must say, however, that even though I'm disappointed by the secondary characters and by that ending, Elise Andrioli is such a marvelous character that I want to read the second book she appears in-- Death From the Snows. I'm a soft touch when it comes to extraordinary characters.