The Gift of an Email 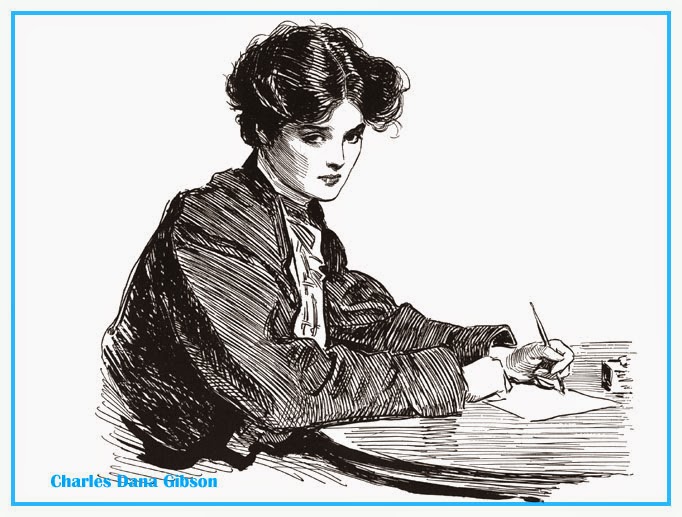 Once a post goes live on a blog, what goes through the blogger's mind? Once written, proofread, and published, does it merely become a source of clicks and page views? Does the blogger consider it a gift of sorts to readers?

I don't know about any of that, but what I do know is that often my own posts can be a source of gifts that keep on giving-- from my readers to me.

Back in July 2010, I wrote a follow-up post to a Wordless Wednesday photograph I'd taken in England. The photo was of a house that had enchanted me in a lovely village in Bedfordshire. Lo and behold, an owner of the house stumbled across that post and emailed to tell me some of its history. With the owner's permission, I'm sharing this history with all of you, along with my photographs. I hope you're going to find this additional information as fascinating as I did.

(Before we start, let me remind you that you can click on any photo in this post, and it will automatically open in a new window so you can see it in a larger size. All the following words are from the email I received from the owner.) 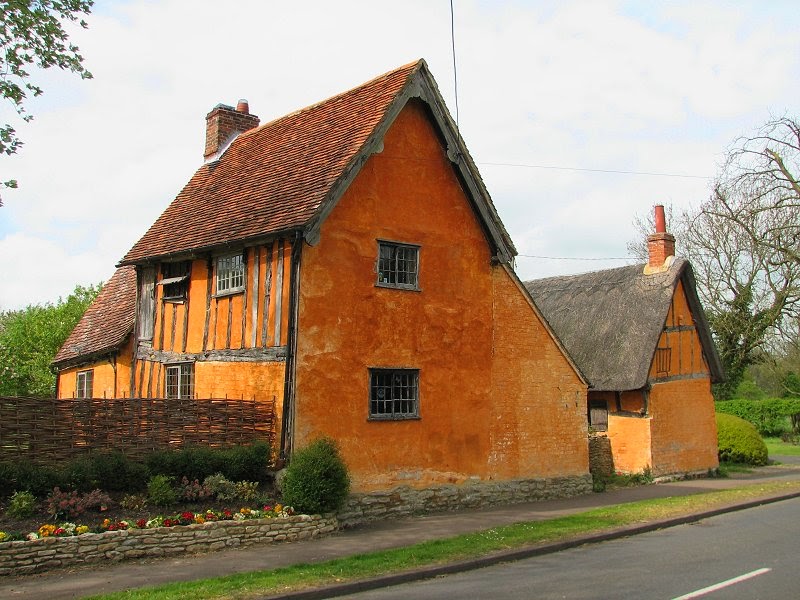 Amazing to think 135 has reached across the pond in such a way!

The house is indeed very old, it was around 100 or so years old when the Domesday Book was written and is mentioned within it.  It is reportedly one of the oldest houses in the UK and certainly within Bedfordshire. 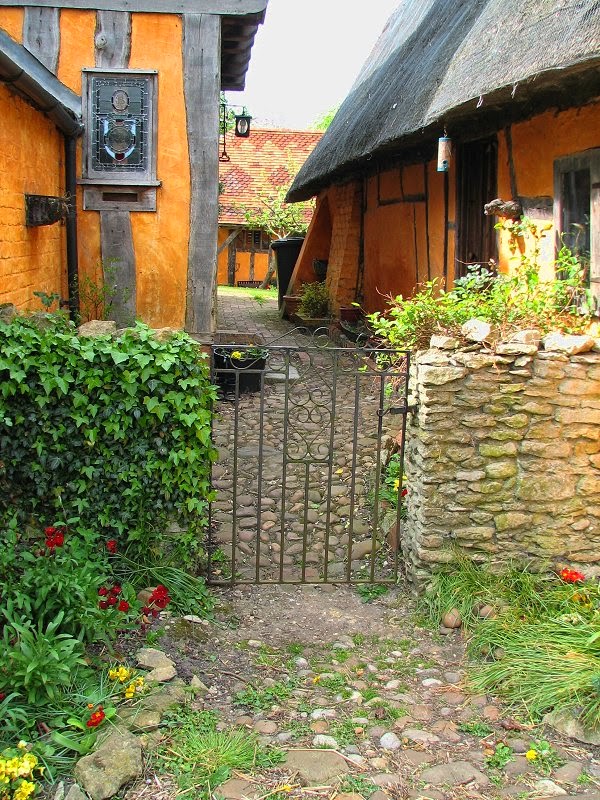 It was originally built as the gate house to the long since disappeared Riseley Castle (only the smallest of earth works remain in the field behind), and the gate you see would have originally been the main entrance to the castle.  Under the cobbles at the front gate you can see in the picture of the entrance with the stained glass is still the original wooden gate post.

The front area by the wrought iron gate, built in brick, where you saw one of our cats, Blackberry (internet fame for one of the cats of the house-- as if there weren’t enough cats on the internet!) is now a kitchen but was originally the cattle shed and milking parlour; the original drain is still there behind the kitchen cabinets. It was originally timber framed but has been replaced as you mention with Riseley brick many years ago.  The rather horrid metal-framed window within it is actually protected due to it being a rather early example of 20th century metal-framed windows, so it has never been changed although it’s out of keeping with the rest of the house. Amazing what you can and can’t do in the UK with properties due to planning laws-- even when replacing it with something entirely more suitable would obviously not be detrimental to the property.

It was also much longer and had a further extension towards the back until someone decided one day, long ago, to saw through the beams and demolish the back of it. 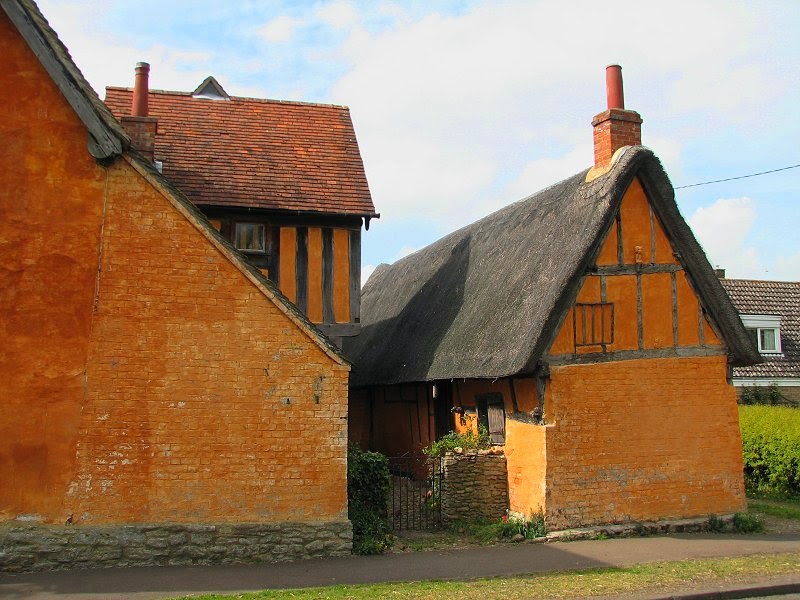 The barn, which is the thatched cottage you mention, was in fact a blacksmith's cottage, and still has the fireplace within it and the later addition of the original stove which was placed into it.

The large window was installed when the property was owned by locally famous artist Stanley Orchard, an oil painter who lived at the property for many years.  It was installed to allow him greater light to paint. Originally this would have been the large side doors to the barn and so whilst not in keeping with the look and feel of the barn it has its history and so has remained.  Also it’s the only real way of getting sufficient light into the place as it is, as you say, quite dark even with electric lighting.

The thatch of the cottage looks rather more bowed than it is by the nature by the large clump of thatch at the end of the barn furthest from the road which is a technique within traditional thatching called a Cock, because it sits proudly at the end of the thatch. The Cock is a way of telling when the top layer of the thatch needs replacing.  When thatching a house only the top layer is replaced unless you need to totally re-thatch and so this is the traditional way of indicating when it is time to do so as thatched roofs are a constantly evolving or devolving material which is weathered and often stolen by birds for nests. It is also in thatching folklore the origin of the phrase ‘Cock up’ to describe the condition of the roof. If the Cock is not up, the roof will likely leak and potentially fall in on itself, leading to a larger cock up! 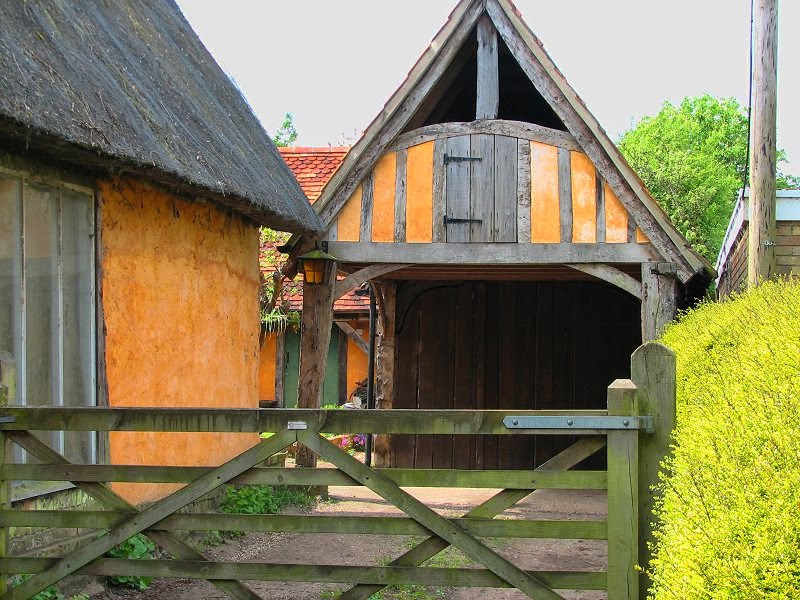 The barns behind which you mention as having a hay loft were in fact from a place called Newport Pagnell and were carefully removed from their original site and rebuilt on the grounds to provide what is now a garage. However there’s evidence that there were buildings on the spot where they now stand and were mainly used for live stock.   However they were long since gone when my parents bought the place.   In many ways these are ‘new’ buildings to the property although not in terms of the materials used but rather in terms of their current location.  Again these are around the same age of the house and of a similar design; after all you couldn’t have erected a brand new modern garage and not spoiled the look of the place.   They were as you suggest though used for housing livestock, mainly cows. 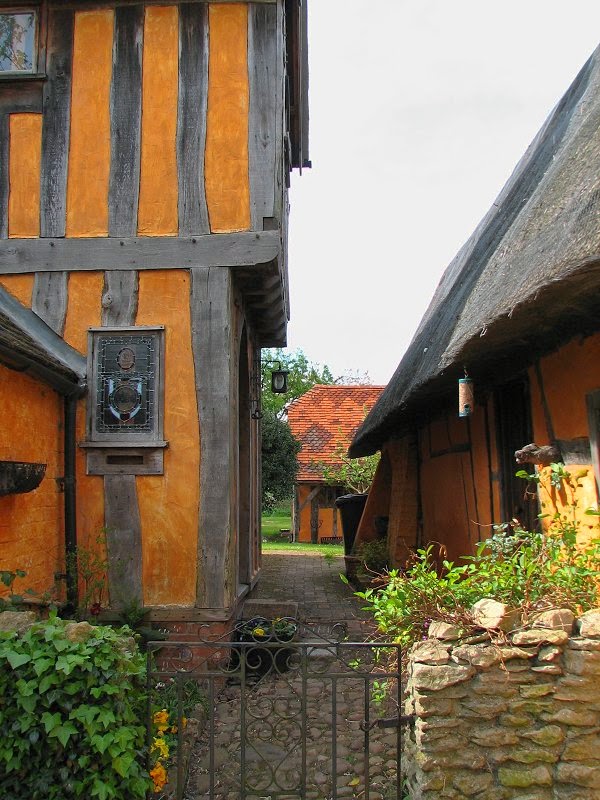 The part of the house which sticks out above the kitchen area is in face entirely new timber frame work in filled with block work and then rendered with plaster as the other parts of the house.  When my parents bought the place, this was a horrid 1960’s flat roof extension which rather looked like someone had spent a great deal of time finding the best way to put the most ugly extension on to the house.

In the 1990’s, we sought and gained planning permission for a more in-keeping extension, but due again to those planning laws, they said we could only have a newer version of the same flat roofed extension.

After some back and forth with the planning department, it was finally decided we could build in traditional materials with the caveat that the entire wooden structure was supported by steel beams-- as according to the building regulations at the time wooden-framed houses were not strong enough to last a sufficient amount of time to be considered safe long term.  A laughable notion when you consider the main house is entire wooden, has no foundations, is built directly on to the ground, and how long it’s been there.

Therefore, we had to do a lot of cosmetic work to make this construction look in keeping with the rest of the house: covering the steel beams in wooden cladding, etc. to make it look-- as it does today-- part of the original. Quite a lot of time was spent sourcing and finding appropriate materials to ensure it looks as though it is part of the entire house and has always been there.

The stained glass window is something which commemorates our time in the house and has items which are specific to our family. Along with the extension, it adds our own bit of history to the property. 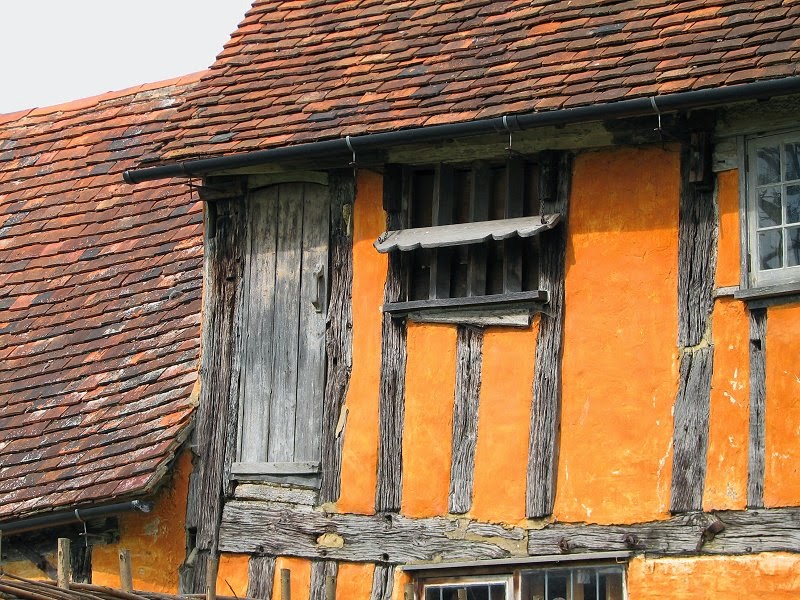 The door in the side on the first floor [what we Americans call the second floor] was in fact the original front door. Typically houses of this type were entered through the upper floors by way of wooden steps or ladders which have long since rotted away.

The orange colour is in fact pink!  Traditionally, like houses today, houses of this type were rendered.  The render was a mixture of lime wash and clays which when placed on to the walls creates a breathable skin to the building. Over time this oxidises and becomes orange.

As much as this house speaks to me, I don't think I could live in it comfortably. One of the things the owner mentioned in the email was the fact that, if you're over five feet five inches tall, you're going to be forced to do a lot of stooping because the ceilings are rather low. Since I'm five feet ten, I think I'd be in a constant state of concussion!

I am so very thrilled to be able to learn more about this marvelous property. It just goes to show that magic can happen when that "publish" button is clicked!