Doing It at the Dixie Dew by Ruth Moose 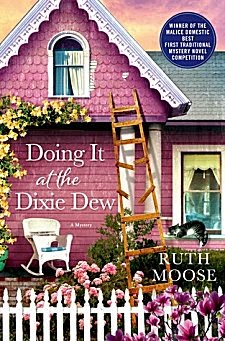 First Line: People don't go to a bed-and-breakfast to die, do they?

When Beth McKenzie came back to Littleboro, North Carolina, to turn her beloved grandmother's Victorian house into a bed and breakfast called the Dixie Dew, she had no idea that one of her very first guests would die. But that's exactly what elderly Miss Lavinia Lovingood did, right upstairs in the Azalea Room. Then Beth finds a young priest strangled in his church. By the time she has her very own brush with death, Beth knows that she's got to find a killer-- even if she's got to uncover every secret in town.

Doing It at the Dixie Dew is filled with genuine Southern charm without a y'all in sight. Littleboro, North Carolina, abounds with eccentric characters, and author Ruth Moose certainly knows how to pepper her gumbo with them. The memory of Beth's grandmother, Margaret Alice McKenzie, lives on in the house this young woman is turning into a business. Beth has Mama Alice's recipes from her catering business and wants to turn one of the porches into a tea room. She even has the help of Ida Plum Duckett, who once worked alongside Mama Alice and is now Beth's "good right arm." And when you have an old house that needs some tender loving care, you need a handsome jack-of-all-trades like Scott Smith. Trust me, with his carpentry skills, his looks, and his caring personality, he's just the sort of guy to make Beth's heart beat a little faster.

But those are the normal characters. The truly eccentric ones are the woman next-door who's very attached to her large white rabbit named Robert Redford, the town's music teacher and church organist who always wears a hat and gloves, and Crazy Reba who Dumpster dives, lives in a tree, and takes baths whenever someone forgets to lock their doors when they run out to the grocery store. The only character I didn't care for is the town cop, Ossie Delbardo, who's clearly out of his depth with a murder investigation but insists that he knows Beth is the killer. I know this type of policeman exists, but I really don't care to have them populate the books I read.

The two things I most enjoyed about Doing It at the Dixie Dew are how the author created a hometown atmosphere that immediately made me feel welcome and populated it with small town characters that I recognized from my own childhood living in a village. The second enjoyment for me was how she used her characters. Taken at a glance, they may seem superficial, but keep reading. They're not. They have secrets they want to keep, and I think some of these characters are going to wind up shocking many readers just as badly as they shocked Beth McKenzie.

Doing It at the Dixie Dew should appeal to readers of Sarah Graves' Home Repair Is Homicide series as well as Mary Daheim's Bed-and-Breakfast series. Ruth Moose's book won the Malice Domestic Competition for Best First Traditional Mystery, and I can see why. I enjoyed it so much that I'm hoping to see Beth McKenzie and her friends again-- as well as wanting to keep an eye on the progress of transforming the Dixie Dew.