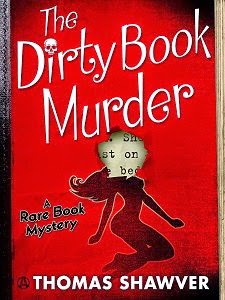 First Line: The young women disappeared, one after the other, a week apart.

Lawyer-turned-bookman Michael Bevan is a damaged soul whose wife's death sent him into a tailspin from which he's still recovering. He's found terra firma with his book business, and he's hoping to find some saleable books at a Kansas City auction house. The auction house has listed a collection of erotica, but Bevan doesn't expect to find anything worth his time. What he does find are exquisite Japanese Shunga scrolls and a first edition Colette novel that has an inscription by Ernest Hemingway-- in other words, the stuff of dreams.

Outbid by a stranger, Bevan rues his bad luck, but in an auction house fracas, he notices another book dealer steal the Colette novel. The next day, the thieving dealer is found dead, and Michael Bevan is the prime suspect. He's got to clear his name fast because he's pretty sure no one is going to let him sell books out of his prison cell.

This slim little volume in the Random House Alibi eBook mystery line, could almost be called a ringer. With its cover and its title, I expected something light and almost frivolous, but the bookman angle intrigued me so I decided to give it a try. I'm very glad I did. This is a meaty tale of books, damaged souls, darkness and perversion. When I finished reading, my first thought was that I wanted more.

The author knows his Kansas City setting, and his background of the military, the law, and books mirrors that of his main character. There's the ring of truth in Shawver's pages that really hooked me. The characters are complex and show surprising sides of themselves as the book's tone changes from light to dark-- and the plot made me more tolerant of characters like Bevan's daughter who is Master Class at being bitchy and difficult. (Actually, it was more than the plot; it had a lot to do with Shawver's skill in characterization.)

More than anything else, The Dirty Book Murder reminded me of John Dunning's superb Cliff Janeway series. When Dunning stopped writing those books, he left a gaping hole in crime fiction. What I experienced in reading this book leads me to hope that Thomas Shawver, with his own characters, his own experiences, and his own knowledge of books, will pick up Dunning's baton and lead the way to reading nirvana.