@ The Poisoned Pen with Michelle Gable! 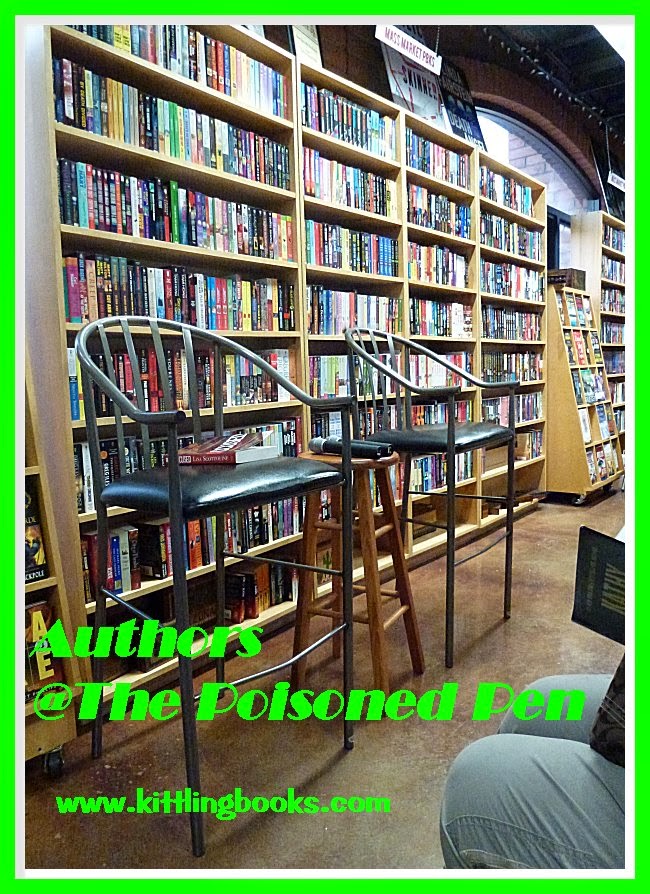 After a couple of weeks away from my favorite bookstore, The Poisoned Pen in Scottsdale, Arizona, it was time for Denis and me to head back over there. (I go through withdrawal if I'm away too long.)

This evening we would be listening to author Michelle Gable talking about her debut novel, A Paris Apartment. Ever since I'd first heard about the apartment in Paris that hadn't been opened for decades and was found to contain untold treasures, I'd been including links to articles about it on my blog and through social media. I'd always believed that it could be the basis for a marvelous novel, and I was looking forward to having Michelle sign my copy so I could get it home and read it.

You never know how events for debut authors are going to go. There's always the dread that no one will show up. Fortunately for us all, that certainly wasn't the case for Michelle-- in fact The Poisoned Pen's employees had to hustle and put up more chairs so everyone could take a seat.

"During play dates, I would make my friends..."

Events Coordinator David Hunenberg admitted that when he first learned he would be interviewing Michelle, he thought he was preparing for the man who wrote The Paris Architect. When he got the book, he quickly learned his mistake. "I've really enjoyed reading your book," he told Michelle, "and I had to force myself not to read the ending because I'm always afraid I'll let something slip during an interview!" After we all finished laughing, David asked Michelle how long she'd been writing.

"Forever, I think," Michelle said with a laugh. "I can remember being ten years old and making my friends sit down and write books during play dates!" Since her father is a writer, Michelle knows she came by her compulsion honestly. She now works in the world of finance and accounting.

A busy wife and mother of two energetic children, Michelle wrote a novel and sent it to a publisher. Wonder of wonders, her manuscript was pulled out of the slush pile. The reader loved the book and it generated a lot of interest, but on the day of the auction, everyone pulled out. The story was considered to be a hard sell for a debut author, and no one was willing to take a chance on it.

In 2010, her agent sent Michelle an article about a Paris apartment that no one knew about until the rent stopped being paid. Owned by a woman whose grandmother was a famous Belle Epoque courtesan, the rooms were bursting with treasures-- including an unknown portrait by renowned artist Giovanni Boldini. Along with the article was a note from Michelle's agent saying, "I think you could do something with this. It would make a great story!"

The story took hold of Michelle's imagination. She spent months doing research, especially since she had to learn as much as she could not only about the life of the apartment owner, but the sort of work experience someone would have working in a great auction house like Sotheby's.

"I honestly don't know why the story didn't go viral when it first came out in 2010," said Michelle. "The apartment owner was close to being what we call a hoarder today. One of the things that helped me flesh out characters and historical events in the book was the fact that dozens and dozens of calling cards were still lying in silver trays in the apartment. Those calling cards gave me the identity of her visitors, and I could then try to look them up."

Fortunately Michelle has a friend who works at Sotheby's, so she could ask what it was like to work there. "I can get caught up in research and do too much," she admitted. Once she had some research under her belt, the main character of April Vogt "came together very quickly for me."

Someone in the audience asked her about any help she had with early drafts of the novel. After telling us that her book club read an early version, Michelle then said, "I'm fortunate in that I have an agent who gives great feedback. It's a very good union between writer and agent."

David wanted to know how easy it was to flesh out Marthe de Florian, the courtesan in A Paris Apartment. Michelle laughed. "That part came very easily. I'm not sure what that says about me! Her voice was inside my head very quickly, and I found that I was able to crank out those journal entries in thirty minutes. I know it sounds kind of hokey, but it all pretty much wrote itself. I didn't even have an ending in mind when I began to write the book."

Other folks in the audience wanted to know more about the real apartment in Paris. Had Michelle been able to see the inside of it? "No, but I was able to see the outside. The story came out after the apartment had been cleared out and the auction held. No one knew the portrait by Boldini existed. It sold for €2.1 million-- and I have no idea who got all the money from the auction."

"Can't you write about a normal husband?"

There were published authors and aspiring writers in the audience, and they had all sorts of questions for Michelle. She very happily answered them all.

"I loved learning about art and Sotheby's," she said. "I didn't like history in high school. It wasn't until I went to college back East that I grew to appreciate it. When I was writing A Paris Apartment, I almost didn't want to stop researching. I kept wanting to learn more and more and more!"

Michelle has completed her next book, which her agent has an option on. She's now researching for a book that has something to do with another Boldini portrait; she's fascinated by the artist. (He's one of my very favorite portraitists.) She's also playing around with research on Happy Valley in Kenya-- an "anything goes" playground for the rich from 1900 and on into the 1930s.

Michelle Gable is married and has two children, aged ten and eight. She also works full-time in the financial planning and analysis department for a software company. She has to be very disciplined in order to write, getting up very early in the mornings and writing on the weekends. Her goal is to write 1,000 words each day, and she's learned to stop in the middle of a sentence or a paragraph in order to jump start her writing the next day. Her husband is very supportive ("He doesn't need to be given instructions"), but he feels there is a lack of high quality male spouses in his wife's books. "He wishes I'd write about a normal husband!" Michelle laughs. "I made the mistake of naming one of my characters Brian as a sort of homage to my brother. After seeing Brian's name in the book, my mother started picking apart the novel's mother character. I was getting middle-of-the-night texts from her!"

"This has all happened so fast for you!"

Fan: Did you use real names?

Michelle: The courtesan's name is real, but not the apartment owner's.

Fan: Where are you from?

Michelle: I grew up in San Diego.

Fan: Are the journal and diary entries real, or did you make those up?

Michelle: The journals and diaries are made up, but I did compare what I'd written to the existing diaries of one of the courtesan's contemporaries. (This particular contemporary went from working at the Moulin Rouge to entering a religious house and taking vows to become a nun.)

Fan: Which scene are you most proud of?

Michelle: I'm most proud of the auction scene at the end of the book.  That scene had problem areas that took me a while to figure out fixes.

Michelle: Definitely handwritten notes. I have tons of notebooks on shelves! For some reason, handwriting sticks with me more.

Fan: Did your mother keep your childhood stories that you wrote?

Michelle: Yes, she did, and I'm so happy to say that my girls write, too. In fact, my book has encouraged them to write even more!

Fan: Do you read your reviews?

Michelle: I do read my Amazon reviews, but I've been told to stay away from the reviews on Goodreads.

Another fan wanted to know just how long Michelle has been writing.

As the evening was drawing to a close, Michelle shared some information about that first book that didn't sell. "It's about the aftermath of a plane crash written from the point of view of the dead pilot-- second person voice. Now that A Paris Apartment has been released, there's been renewed interest in this book."

Michelle also has been working on an idea about a group of sorority girls who may-- or may not-- have committed a crime. "It's a little more campy," Michelle told us.

It's fun to go to The Poisoned Pen to see established, bestselling authors, but it's just as much fun to see someone who's just getting started. I'm definitely looking forward to reading A Paris Apartment!