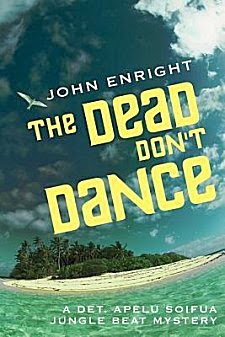 First Line: What Apelu liked about walking down the road through To`aga was that nothing much ever changed.

Following a family tragedy, Detective Apelu Soifua has moved to a very sparsely populated island in Samoa, roughing it on a family plot of land, doing a lot of walking, a lot of brush clearing, and a lot of drinking. He is in self-imposed exile, and has little to do with other humans other than a recluse and a pair of marine biologists based in the National Park of American Samoa.

Apelu's exile is turned on its ear when a rather hostile team of surveyors arrive on the island and begin ripping through a section of  his family's land. When he does a little checking, he learns that there are plans to build a resort hotel on the beach-- plans that are almost guaranteed to destroy the coral reef and the island's peaceful way of life. When a gruesome murder is committed, Apelu must come back from leave to solve the case officially.

I can't put it any plainer than this: I love this series, and it just keeps getting better. But I also have to admit that when I began reading The Dead Don't Dance, you could've heard my groan all over town. I don't have that many pet peeves when I read crime fiction, but one of them is my intolerance for drunks. Having this book begin with a self-pitying man trying to drink himself into oblivion filled me with dismay; however, I kept reading on the strength of the two previous books in the Jungle Beat series. I'm so glad I did because The Dead Don't Dance is the best one so far.

The mystery is a strong one, filled with native legends, strong hints of the supernatural (or is it really?), shady people up to no good, and the environmental impact one resort could have on an entire area.  The mystery alone makes the book good, but there are three more things that make it wonderful.

Enright is a poet, and it shows when he describes the Samoan landscape and wildlife. The man paints with words.  He has also created an excellent character in Apelu Soifua. In the previous two books, he's mostly seen as a detective with only glimpses into his family life. In The Dead Don't Dance, we see him as an investigator naturally, but we also get to see him as a father spending time with his son. It is a relationship that adds depth and a wide range of emotions-- from humor to heart-stopping fear-- to the story.

Last but certainly not least is the author's depiction of Samoan culture, family life, language, and myths. It is a culture that is still trying to survive the aftermath of World War II as well as the present-day inroads of greedy, technology-laden American and European lifestyles. I've learned so much about this place and these people from reading his books-- anything from how land ownership is dealt with to how people travel from island to island (and much more). The author's lyrical and factual evocation of Samoa enriches every part of the book it touches. Story, writing style, character, and culture all combine in John Enright's Jungle Beat mysteries to form a series that I just can't recommend highly enough.