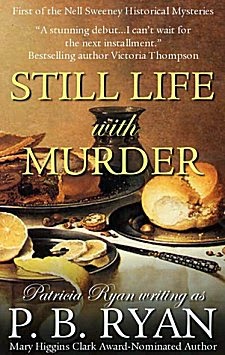 Young Nell Sweeney's life experiences have been mostly bad, but she has enjoyed her time assisting a Cape Cod physician, and she feels some regret at leaving him for her new post as governess for wealthy Viola Hewitt in Boston. Her new employer is kind, and Nell loves the child she cares for, but her duties suddenly change when the black sheep of the family-- Will Hewitt, long thought to be dead-- reappears in Boston and is charged with murder. Viola Hewitt believes her son to be innocent, and she insists that Nell help her to prove it. Unfortunately Nell's task is made even more difficult by the fact that Will is an opium addict and doesn't want anyone to help him.

When I began to read Still Life with Murder, I expected to find a pleasant little story set during a period of history in which I've always been interested. Did I ever underestimate this book! Ryan's setting is wonderfully evocative and made me feel as though I were walking the streets of Boston during the Civil War. I deduced the identity of the killer early on, but that in no way spoiled this book for me-- there's simply so much to savor that this small detail quickly became irrelevant.

What makes this book so special are its two main characters: Nell Sweeney and opium-smoking ex-battle surgeon William Hewitt. Both have their demons, and it is clear by book's end that there are secrets yet to be revealed.

Nell's past has been one of poverty, hardship, and a fight merely to survive. She has done so through sheer force of will, her intelligence, and her understanding of the darker side of human nature. She may be a governess in the 1860's, but she's no shrinking violet, and it's fun to watch her try to keep up appearances while taking care of business. As she tries to clear Will's name, it would appear that more men than women have delicate sensibilities that she must try her best not to offend. I haven't had a character get me this fired up in a long time.

Sympathy for William Hewitt is slower to form, as it probably would be for a man willfully addicted to opium, but Ryan works her magic on him, too. Family dynamics play an important role in his behavior, as do his experiences during the war. He's determined to go to hell in a handbasket reeking of the poppy, and the author makes us want to know why.

Nell and William are two fascinating, multi-faceted characters, and I cannot wait to read the next book in this series. Sometimes-- as in the case of Still Life with Murder-- it's wonderful to have your expectations blown to smithereens!