A Few Drops of Blood by Jan Merete Weiss 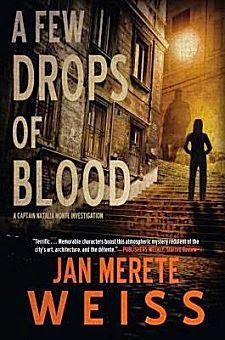 First Line: The moon was a ghost when the call came in.

The bodies of two murdered men are found astride a statue in the garden of an elderly countess. The shocking and gruesome scene is not what most people have in mind when they breakfast out on the terrace. At the request of the countess, Captain Natalia Monte of the Naples Carabinieri is assigned to the case. It's a case that will have Natalia investigating art galleries and local crime families, but more importantly, it will have her questioning her own past and allegiances as well as those of her beloved city.

When I read the first book in this series, These Dark Things, I had mixed emotions. I absolutely loved the setting, but felt that there were problems with the plot and the characters. I'm very happy to say that A Few Drops of Blood have put most of those problems to rest.

As in the first book, the setting is superb. Since Natalia lives close to the police station, she often walks to work, to cafes, and to the shops. As she walks, her policeman's eyes are never at rest, but as she's observing, she's also mentally listing all the many reasons why she loves the city of her birth. Her musings are making me fall in love with the city as well.

The main characters are more fleshed out in this book. There have been consequences to Natalia and Pino's relationship that began in the first book, and we get to see how they are dealing with them here. The most fascinating part of Natalia's background, however, is her relationship to several females who have positions of importance within the local Camorra (crime families). These women have been close friends since they were small children going to school together. Natalia knows that her job requires her to forsake her friends, but she refuses. This insistence gives her both an edge in solving some of the cases she's assigned and a disadvantage because someone's constantly trying to force her to take a side. I admire her for her refusal to abandon her friends, and I also enjoy watching her walk a tightrope as she investigates anything that touches the Camorra.

The only thing that bothered me as I read was the fact that the plot seemed to wander from time to time. Although I was enjoying the scenic route as I turned the pages, I kept wondering when Natalia was going to settle down and actually investigate the murder of the two men. Never fear, Natalia does put all the facts and clues together-- and she reveals some very nasty thorns hidden amongst the petals that make up the beautiful city of Naples. This series is turning into something very special, and I look forward to the next installment.